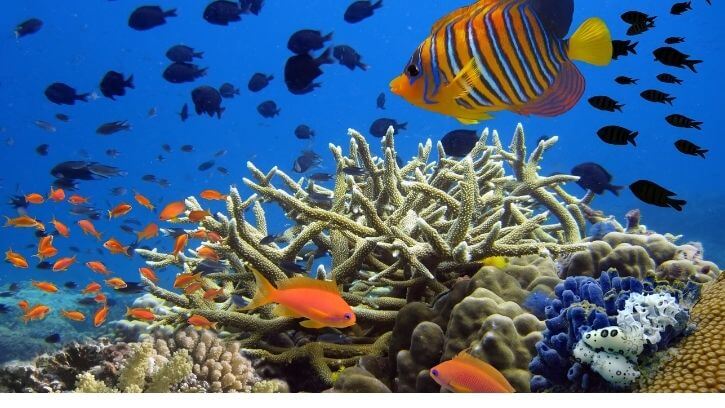 We will show you some of the best schooling fish for saltwater reef aquariums in this article. Schooling fish are highly sought after as the way they group and swim together is a wonderfully unique behavior. Watching a large community of schooling fish is certainly something to appreciate as well. It’s incredible to see them swim with each other in complete unison. Due to the size of the tank needed to properly house them, it can be hard to maintain schooling fish in a home aquarium.

We recommend an aquarium that holds at least 100 gallons to provide sufficient habitat for schooling fish. In saltwater tanks, smaller schooling fish are usually housed, but a larger aquarium tank is needed to house larger fish or greater schools of fish. In general, these fish are just a few inches in size, and you’d only keep a few enough to school together in your tank. In the wild, schools of hundreds or even thousands of fish are commonly seen schooling together. Of course, this is not possible in a fish tank at home. Not all saltwater fish are schooling fish. There are some that are better suited for a saltwater aquarium than others.

What Are Schooling Fish?

Schooling fish are defined as a group of fish which swim in a coordinated manner in the same direction.

Why Do Fish School?

There are several reasons for fish to exhibit schooling behavior. In the wild, schooling is predominantly done for safety, breeding and feeding. To protect themselves against predators, it is very common for fish to form large groups, adopting a ‘safety in numbers’ approach. Defending their territories and keeping each other protected is much easier for fish in a school.

Another explanation for fish schooling is that schooling for breeding purposes brings males and females together. This dramatically improves the chances of individuals successfully breeding. Finally, it is easier for a school of fish to find food compared to a single fish.

Here are our top picks for the best schooling fish for your saltwater tank. All of these fish are peaceful and reef safe.

The Blue/Green Chromis (Chromis sp.) is a very colorful and lively fish that can be seen swimming in the middle to upper areas of the tank. It is better to get them in groups of at least 5-6. Other fish are unlikely to bother them as they are rarely seen as a threat. Although they are a type of Damselfish, which are known to be aggressive, the Chromis are not aggressive themselves. For beginners, the Chromis is perfect as they are very hardy and can withstand lapses in water quality.

Chromis love to swim around rock formations in the tank, so make sure to have lots of interesting features for them to play around in. They will also dart around your tank, as they are a fast-moving fish, which is completely normal behavior. Chromis are also easy to care for when it comes to feeding, as they are not known to be picky eaters. Some aquarists actually hand-feed their school of Chromis!

A tiny and peaceful fish that can be kept as a single fish or in groups is the Bangaii Cardinal (Pterapogon kauderni). It is a fish that looks really special with black streaks and white dots. It is a very slow-moving fish, covering all areas of the tank. They are a very popular fish to keep. If you plan to buy a Bangaii Cardinal or a group of them if possible, aim to find ones that are tank-raised. As their popularity has placed them on the IUCN Endangered list.

The Firefish Goby (Nemateleotris magnifica) is another firm favorite among aquarists. It is a wonderful fish with a stunning coloration, a distinctive shape of the body and an unparalleled personality. The Firefish Goby makes an ideal addition to the smaller reef system due to its small scale. Keep in mind that a stressed Firefish Goby will try to jump out of your aquarium. As such, make sure to house your Firefish Goby in an aquarium tank with a lid.