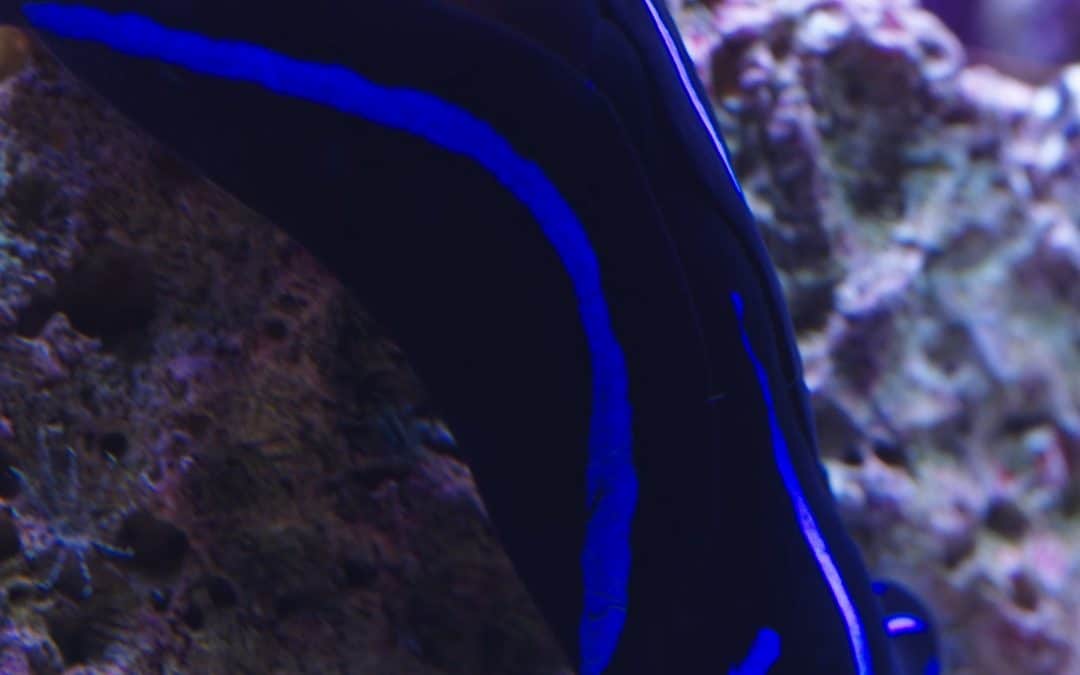 The blue velvet nudibranch is a type of sea slug that is popular among marine aquarium enthusiasts. They are black in color with a few bright, electric blue lines that run along the length of its body. They have a head wider than the body and have a blue stripe run down the middle of their head too. They are experts at biomimicking, like most species of nudibranchs. They use this ability to find flatworms – which are the majority of this sea slug’s diet. Their mouth resembles a chameleon’s tongue. They have a tube-like appendage that shoots out to suck flatworms in. Watching them hunt in aquariums is fascinating to watch as their movement is hypnotic. 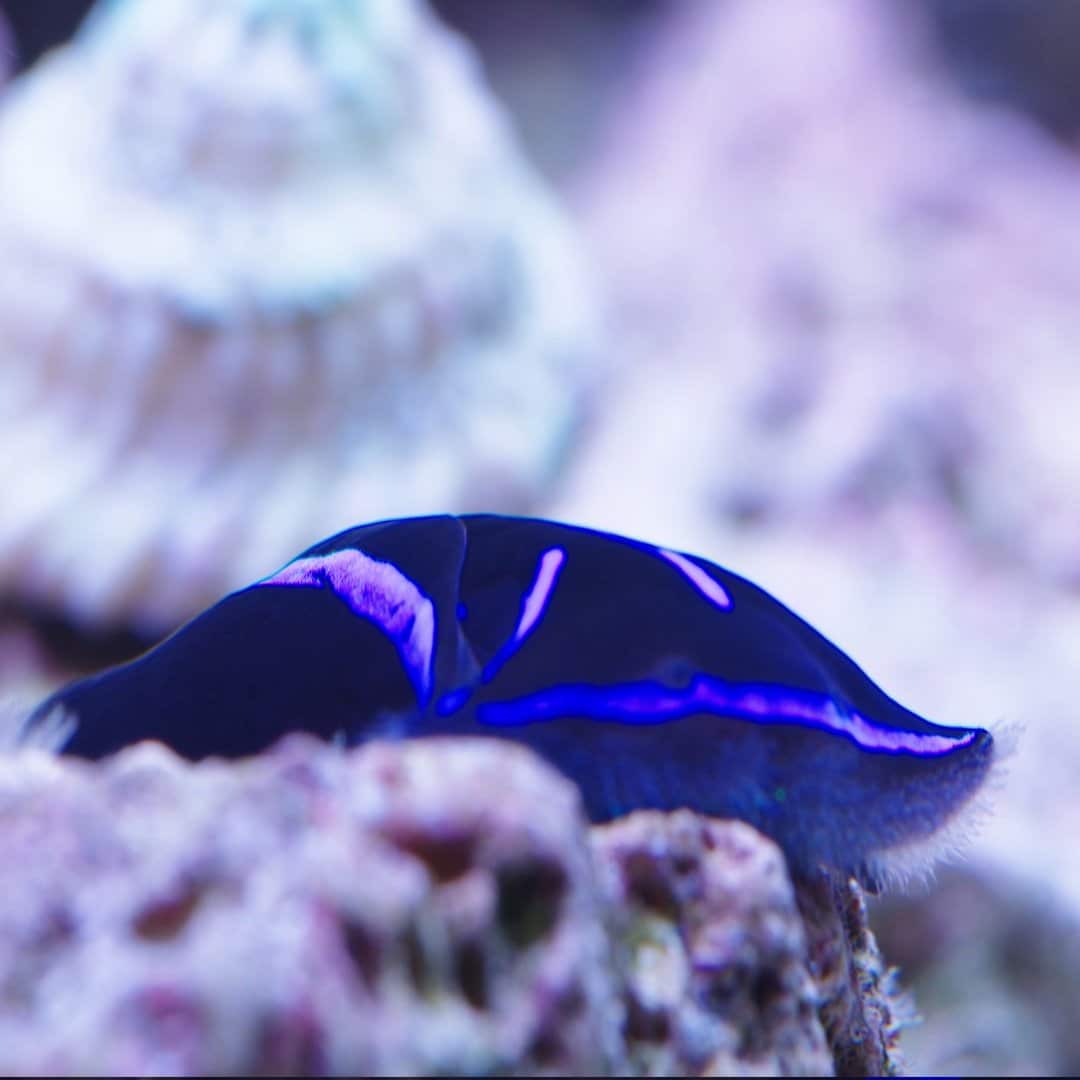 Blue Velvet Nudibranchs require a steady diet of flatworms to be healthy and active.  Though they do not have a great life expectancy in closed-off tanks, they can thrive when taken care of. They need to be acclimated slowly to an aquarium using the drip method. They should not be thrown into an aquarium with a large flatworm infestation as they tend to feed heavily and remain dormant for days which makes them die sooner.

They are also known to be sensitive creatures who respond negatively to spikes in alkalinity or nitrate levels in the water. They should be handled by experts and are not a good choice for beginner aquarium enthusiasts.

This fragility means that care should be taken in fencing off pipe outlets, pumps or drains. Heavy turbulence or flow could easily dispel these creatures causing harm. 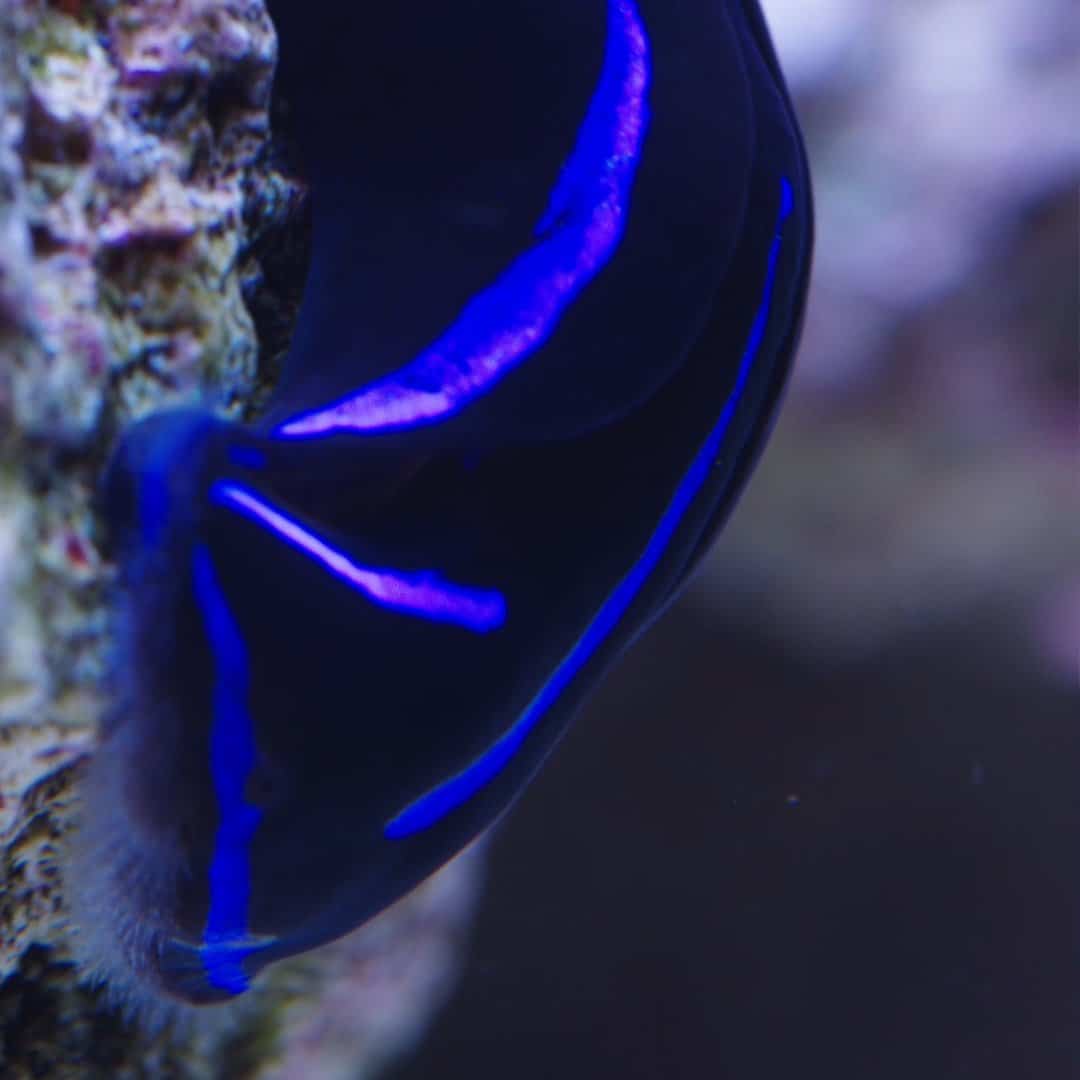 They come in the 1 to 2 inch size range and do not grow very big. They also stick to rocky outcrops in the tank and move around searching for worms. This makes them a beautiful addition as they provide a different viewing experience to traditional marine life. They offer functionality and beauty to the tank, a rare feature in aquariums. Usually, tank cleaning marine creatures are not the brightest or most attractive. But the nudibranch will be the cynosure of even the most intricate and beautiful tanks.

They still are some of the most efficient and beautiful methods of flatworm control for any aquarium and if you are thinking about getting a blue velvet Nudibranch, we suggest you shore up your tank care and ensure a steady and reliable environment for them. Learn to use the drip method to introduce them to new environments as they do not do well to sudden changes. Temperature and alkalinity settings along with current speeds should be monitored and maintained before considering nudibranchs.

You can see them in action in this cool Video

Copepods & Amphipods: Fun Facts that will blow your mind!

Do you want copepods in your reef tank? Considered the Super Food of the Ocean

Copepods: the largest biomass on earth, the fastest organism and having one of the highest nutrient dense biological makeups,

The mighty Copepod is the Super food of the Ocean.

This subclass of Crustecean, Copepoda, make up the largest biomass on earth.; this fact alone is indicative of the critical role copepods play in the health of the earths water sources.  Much to many peoples surprise, Copepods are not limited to oceans.  Copepoda live swimmingly well – in both freshwater as well brackish water.

Copepod varieties are well over 10,000 with these small yet durable creatures boasting one of the must robust adaptation abilities known to man.  Not only are they the largest single component of the food web, but they are also the fastest animal on the planet relative to their size.  Comparatively – if a person could jump 1/2 of a mile in 2 seconds, humans would earn the coveted title of fastest creature.  Copepods have all of us beat, hands down.  As they are a highly sought after food source, their ability to out maneuver predators has marked their success in the game of cat vs mouse.

Copepods also commonly referred to as Pods, need only a small quantity of moisture to sustain life.  They have been found in moist moss as well as polar regions.  In 2004, the New York Times wrote about a small crustacean found in the drinking water in NY City.  Our forever friend, the copepod, caused quit a ruckus as many orthodox Jews were concerned about the small crustacean and the “Kosher-ness” of their kitchens.  Water Filters were installed at such an alarming rate the wait time was several weeks as the plumbers in the NY City area struggled to keep up with demand.

Copepods are also Environmentally friendly.  Scientists estimate that copepods are the largest absorber of carbon, valued at 1-2 billion tons of carbon each year.  Since they release less carbon waste then they absorb, this gives the humble Pod the well earned nickname carbon sink, defined by Wikipedia as a reservoir which accumulates more carbon from the environment then it excretes.

As a key component in the nutritional well being of many animals, the amazing aspect of pods is their sheer percentage of protein they bring to the dinner table.  Pods are one of the most nutrient dense organisms on the planet at an average of 50% Protein.  Animals, such as, seabirds, invertebrates, both freshwater and saltwater, as well as whales & many other fish, survive primarily on a diet of pods.  .

When considering what these small but mighty creatures will do for your reef tank, consider this:  Uptake of waste, super food of protein value, and a natural super organism.  Why would you not wan them in your tank?

Considering all that they do and are responsible for, it is easy to say that copepods are the most important creature we can own.

Saltwater Aquarium Snails can be classified a few different ways but for the use of snails in aquariums, it is most helpful to think about what they eat.

First consider this, unlike crabs, saltwater aquarium snails consist of a large meaty body… so if they die they will produce a LOT of waste.

Simple Infographic displaying the Nitrification Cycle in an Aquarium.

So if you buy the wrong snails or to many snails you will actually increase your algae instead of reducing the algae.

1. Algae – algae eaters get a lot of attention because everyone thinks they are the god send for the aquarium.  This is partially true.  They are great for eating algae … However to much of a good thing is a bad thing when it comes to algae eating snails.  To many snails .. not enough food … Snails die …. algae is fed from the death of snails so you end of with more algae.   YIKES!!!

2. Detritus eaters / waste eating snails.  Now these are your TRUE friends.  They keep the house clean in ways you may never know or think about.

A safe recommendation for snail stocking is:

The other consideration is the type of snails.  As with people, all snail palates are not created equal.   So variation is KEY.

Some snails like green algae (ie: Turbo Snails) on the glass, while Cerith Snails prefer brown algae on the rocks. 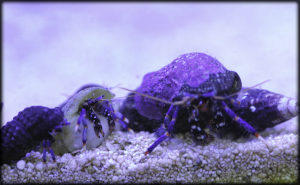 I noticed several saltwater hermit crabs piled up at the front fighting for food, as I watched my saltwater aquarium after feeding time.   Their antennae raised and lowered in a warning communication call.  It was fascinating to watch them duck and dive for the food pieces, maintaining their distance from each other yet still attempting to steal the morsels.

After Blue Legs Hermits ate all the Red Slime Algae

The diversity of saltwater hermit crabs is amazing, from blue legs, green legs, brown, red, scarlet, white and black.  Additionally there are many that have some type of patterned design; ie:  halloween, blue knuckle, etc.  Some grow very large while other stay small.   The diets are very different as well, from carnivores to strict herbivores.  Blue Leg Hermits typically will utilize a shell from a whelk, turbo or cerith.  I have seen some pretty inventive hermits who took up house in pieces of sponge, dragging it around on their back.