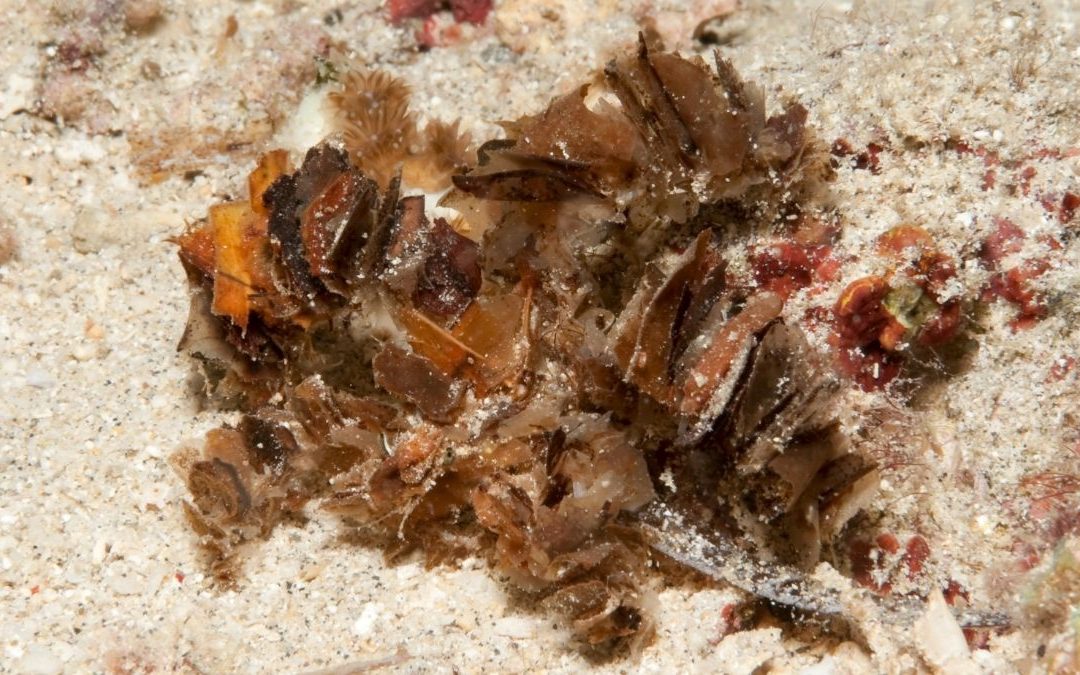 Using its environment, this amazing crustacean adorns itself with debris like shells and algae to stay under the radar and invisible to predators. They are one of the most unique creatures that you can add to your beautiful saltwater aquarium. They are found in both the Indian Ocean and the Pacific Ocean. They come from the Majidae family of spider and decorator crabs who are experts at hide and seek.

Much like a soldier behind enemy lines, this amazing creature uses its surroundings to disguise itself, allowing for a great ability to camouflage. Unlike the name suggests, they do not just decorate their bodies to look pretty. But, they use this as cover to hide and stay alive.

This species, over time can completely change its appearance and look like a floating piece of rock or an algae covered rock and it is impossible to distinguish them from their surroundings once they acquire the right materials. With different colors and their own unique look, they take over your tank and become the biggest centres of attraction.

But beware, as they could turn to your corals, zoanthids and anemones if the tank is not filled with suitable shells and debris. They attack corals in a bid to rip pieces off and plop it on their bodies. This behavior can be easily controlled, however, if you replenish the substrate with small rocks, pebbles and shells. They can harm soft corals in your tank. So, make sure that you introduce stony corals to prevent this destructive tendency,

They are very opportunistic when looking for camouflage and they can select anything from seaweed, corals, rocks to even other small animal carcasses from around its habitat. This camouflage is then used to protect themselves against other predators as long as they stay in the same vicinity they just scavenged. They match their look to their home turf and the colors and patterns might be different in another reef. So they will have to collect new debris that matches their new surroundings.

Their unique ability to camouflage themselves with algae and other animals from its surrounding is due to their unique velcro-like hooked bristles called setae. These bristles are found in the outer layer of their exoskeleton which allows them hang/hook on jagged pieces of debris.

Being nocturnal, they scavenge and hunt during the night. In an aquarium, they show activity once the lights are turned off, so make sure you have a steady day/night schedule for your tank.

Decorator crab’s shell doesn’t grow, but the crab does. To solve this problem it must molt out of the old shell and develop a new, tougher and bigger exoskeleton. This helps the crab grow to the size of their environment and they stop growing once they reach an optimal size. In open waters they tend to be bigger than their tank counterparts.

They are extremely volatile during this time so the Decorator Crab hides from the predators while its shell is hardening. Once they reach sexual maturity they stop their molting process.

Spider Decorator Crabs doesn’t just use their decorations to camouflage themselves but they also use it as a defense mechanism. For example, when they decorate themselves with anemones, urchins and hydrozoans (types of colonial organisms often mistaken for algae or corals), they can also be used for defense as any of these decorations can give a nasty sting to any predators if they get too close.

Often, you can see them carry entire sea urchins over their head in anticipation of an attack from above. Sea Urchins have a venom and spikes that do not harm the decorator crab, but fleshy fish and other predators tend to stay away!

Decorator Crabs also use special toxic seaweeds that can leave a nasty taste which can potentially be fatal to any predator that wants to attack it. This extra fortification along with their heavily armoured shell makes Spider Decorator Crabs an off-putting option for many of their natural predators.

They are not just wonderfully adaptive and active creatures, but they also help in removing algae in tough to reach places. But if you are to add a decorator crab into your aquarium, you must be mindful of a couple of things.

If your reef tank setup is large enough, then the effect it has on Corals are the exact opposite. SInce the decorator crabs are nocturnal, it harvests algae, corals and other invertebrates to attach onto its body. This process usually harms the soft corals and can affect its growth inside a saltwater aquarium. But if the tank is big enough, this activity actually helps to spread and propagate these corals all across the saltwater aquarium.

Their preferred foods are meaty foods like chopped fish, clams, mussels etc. They scavenge for their food as well, so they go through the entire reef system or their vicinity to see if they can find any meaty leftovers. In captivity, you have to make sure to feed them their meaty treats from time to time.

Decorator crabs are one of the most unique and beautiful creatures that you can ever come across in the ocean and in your saltwater aquarium. With all the information we have on decorator crabs and different animal and algae accessories that they decorate themselves with and the unique and creative way in which they utilize them, it is quite clear that they are not just for decoration

They are not just pretty to look at, they are also highly intelligent with their highly selective and complex behaviour. Even though they spend most of their time walking sideways from one place to another, it is easy to assume that not much is going on with this decorator crabs. But the way in which they camouflage and how they use different living animals with their own traits effectively against predators shows just how intelligent they are.