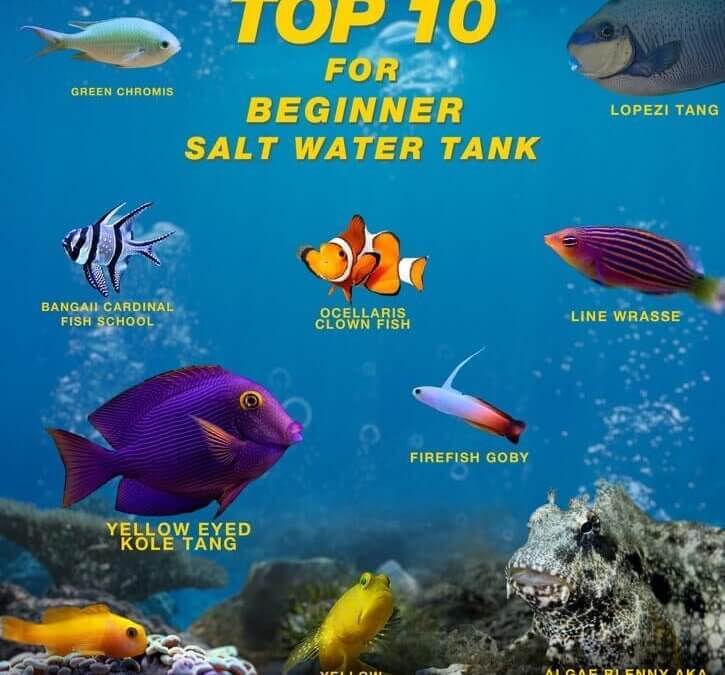 Starting a hobby is a tough endeavor, especially when it involves other living beings. We all have different passions and like different activities. But something that ties us all together is the desire to care for animals. Something about sharing a bond with another species makes us happy and content.

The hobby of maintaining an aquarium is comparatively (to the thousands of years of domesticating mammals and dogs) new but growing in popularity because of how fascinating and different it is. Humans are fascinated by the vast diversity in appearance and behavior of aquatic life. For marine life enthusiasts, creating a saltwater aquarium ecosystem from scratch is a very rewarding experience.

We understand that venturing into something new can be daunting. But as experts in the field, we will try and guide you towards the best beginner saltwater aquarium fish to buy to make your introduction to the world of fish and corals the best experience it can be!

Here is a list of our top 10 saltwater aquarium fish for beginners: 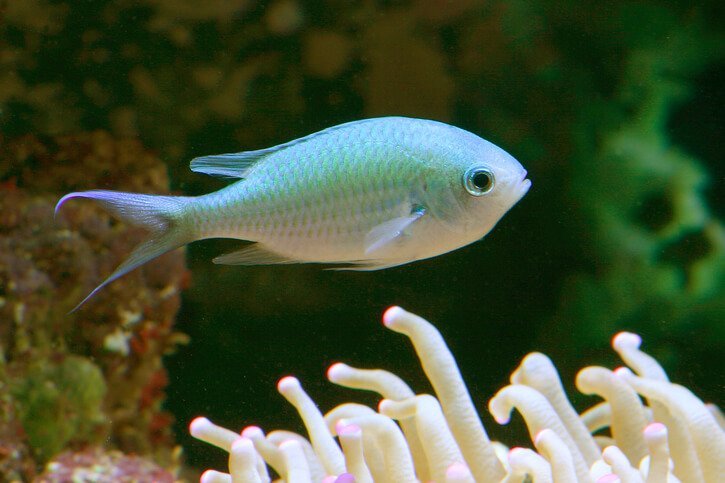 The wide-eyed Green Chromis is a species of damselfish that get their name from their almost reflective green coloration. A staple addition to saltwater aquariums, they add a unique dimension to the ecosystem. Being schooling fish, they tend to stick together in groups of 4-10 individuals and roam the tank throughout the day. They create a striking contrast to the more docile and slow-moving reef dwellers like crabs and shrimp.

Their dorsal sides shimmer under aquarium flights and offer a glittering show of blue-green shimmer as they weave in and out of the currents in synchronized, tightly-knit groups. They are extremely calm fish that generally get along with common aquarium species. They are omnivores and spend their day clustering and searching for food. They do well with a mixture of frozen feed and dried seaweed diet. 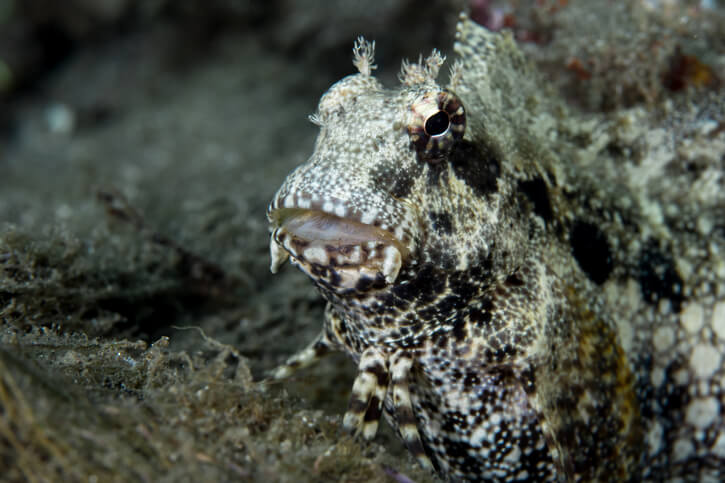 Aquarium enthusiasts adore this camouflaged bottom feeder for its many uses in the tank. With a quizzical and almost scrutinizing gaze, this cute fish from the Blenniidae family spend their time pursuing rock crevices in search of their favorite snack – algae.

With their long and slender body and striking dorsal and pectoral fins, they can be flashy but their black, white, and grey coloring also allows them to blend in well with most rock beds and reefs.

They do well when raised in pairs in a large tank with plenty of grazing areas. They are generally docile and do not bother other bottom grazers. They are known to be a little nippy when they spot other blenny species in the tank but this can be avoided if raised together from spawn.

If your tank is low on algae after a fluconazole flush, supplement their diet with dried seaweed or other plant-based fish food. 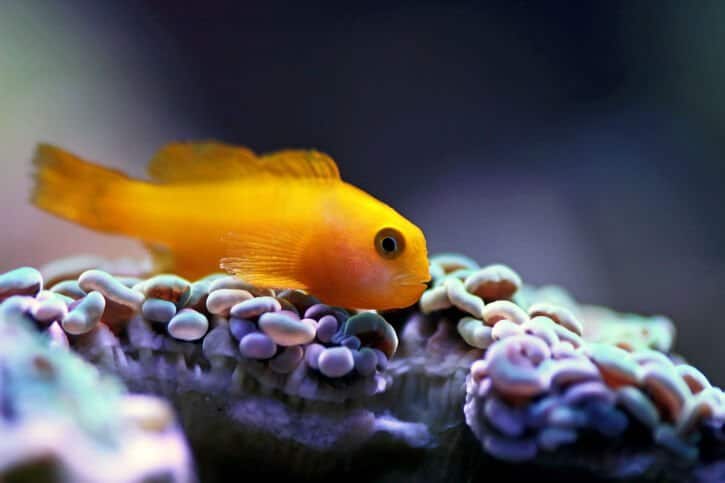 The Yellow Clown Goby is one of the best saltwater aquarium fish for beginners. Found in the waters around Japan and Australia, they have become popular worldwide for being cute and easy to handle.

Wide eyes and an unimpressed expression gives the fish an almost royal swagger. They swim around the tank exuding an air of superiority. Juxtaposed with their small size, they are comical to watch. They also sometimes sport white patches on their cheeks, which gives them their name.

They are carnivorous fish and will thrive with a simple frozen shrimp feed. But they are voracious eaters. If you have a few Clown Goby, increase your feed bit to keep them happy. They are also usually shy and don’t bother the other tank dwellers. Another Goby on our list. They have become a staple saltwater aquarium fish sfor beginners and experienced hobbyists alike because of their extremely unique appearance and striking color pattern.

They are very shy and tend to hide in rock crevices when they feel threatened. They are generally paired together from a young age and are hyper-aware of new firefish that enters the tank. Despite this, they rarely cause problems and are possibly the best-looking fish on this list. 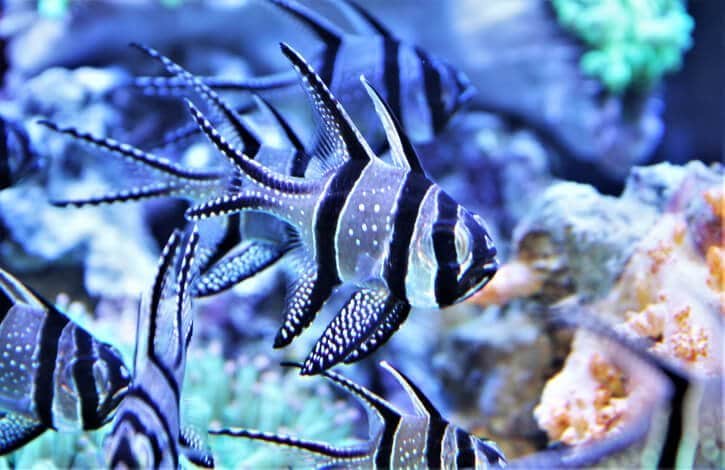 Who said that beginner saltwater aquarium fish need to be plain and boring looking? The Banggai Cardinalfish is an extremely unique and attractive species and a delight to have in the aquarium.

With a brilliant brown, white and black coloring spotted tail, and lionfish like appearance, they have quickly become some of the most popular aquarium fish in the world. They are calm and tranquil and move slowly. They tend to stick to their own group.

Most tank enthusiasts start with a male and a female. They are extremely hardy fish and reproduce in numbers and soon, you will have your very own colony of Banggai Cardinalfish. The beauty of this is, you can observe a clear hierarchy in their group with the adults leading the school and kids following. It is very fun to watch! 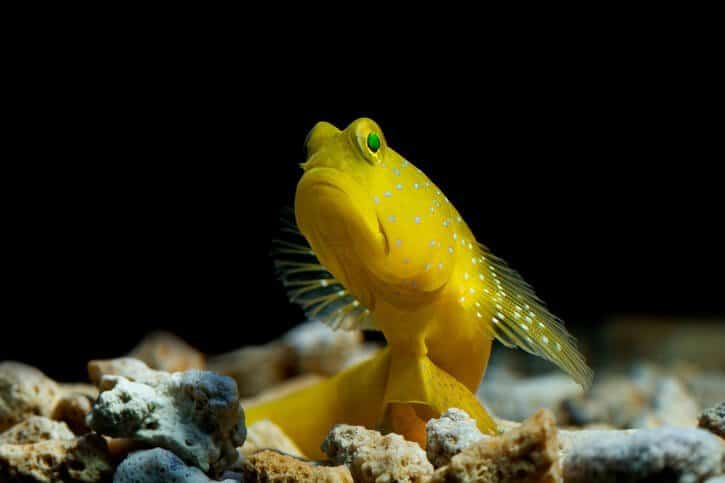 Sporting a perpetual frown and bright yellow coloring with white spots, these unique fish look like a sad face emoji in fish form! Their general appearance and behavior oozes personality and are extremely entertaining to watch.

Usually found in-tandem with Pistol Shrimp, these reef dwellers spend their lives nestled between crevices. They also tend to burrow when they feel threatened. This is an extremely unique behavior to observe and requires a thick substrate or sand and stones at the bottom of the tank.

They are carnivorous and do well with a frozen shrimp feed. They are docile but defend their territory. They get the name ‘Watchman’ goby because they choose a burrow or rock crevice to live in and are often seen sitting at the entrance guardian the area. When raised together, they bond with pistol shrimp and their friendship is unique and great to watch. For beginner Saltwater Aquarium enthusiasts, the watchman Goby will be a great teaching tool. 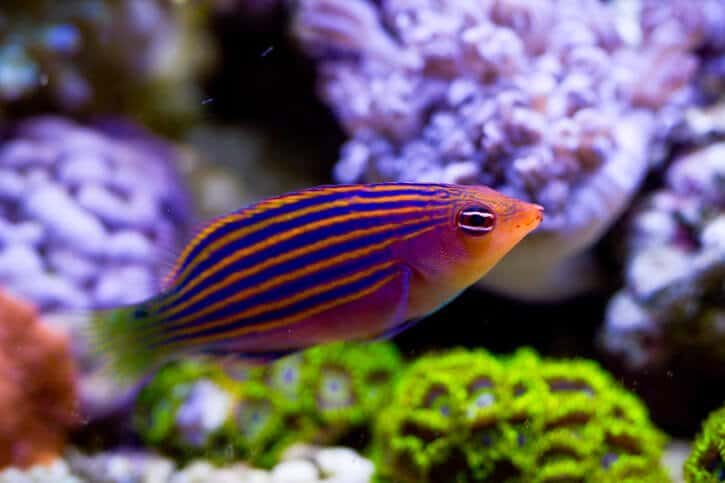 This active fish species from the Labridae family are beautiful and fill the tank with a lively spirit. Curious and graceful, they are often seen picking at rocks and reefs looking for algae and bristle worms.

Because of their diet, they rid the tank of pesky pests while also adding a splash of color. They generally have a beautiful Navy Blue body with orange highlights near the face. They also sport six horizontal stripes that run across the length of the dorsal side of their body. A beautiful green tail and brightly colored dorsal and pectoral fins give them a look similar to a peacock feather.

Most aquarium enthusiasts use them as an offset to the other brightly colored reef dwellers like the Goby’s and Clownfish as they sport a completely different appearance and persona. They are hardy fish and survive on a range of diets (they love frozen shrimp feed) and look great under most aquarium lights. They are also generally calm and a non-aggressive species and are a delightful addition to beginner saltwater aquarium setups. 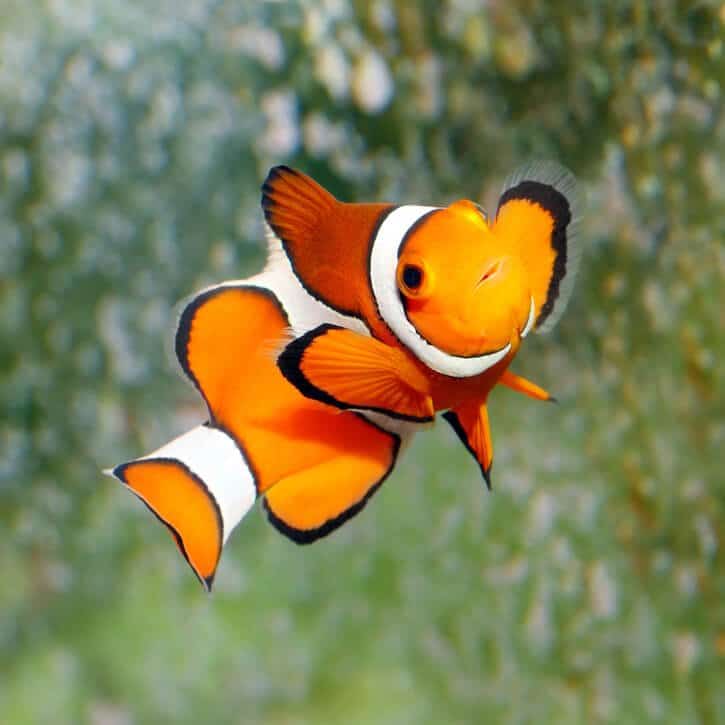 Everyone loves Nemo! This extremely popular (probably the most popular) species of saltwater fish in the world (thank you Disney!) is a great aquarium addition for beginners. They introduce newcomers to this hobby to bonding two species together. Since they live amongst Sea Anemones, it teaches newbie aquarium hobbyists about the close bond marine animals share with each other.

They form cute mating pairs and tend to stick to each other. They exhibit a wide range of behavior and hardly ever get into scuffles with other species. Plus, they are an instant hit with the kids for those looking to pass this great hobby on to the next generation. There is no greater incentive for kids that feeding Nemo from their hands (clownfish get very comfortable can often be fed by hand when they are comfortable with humans). 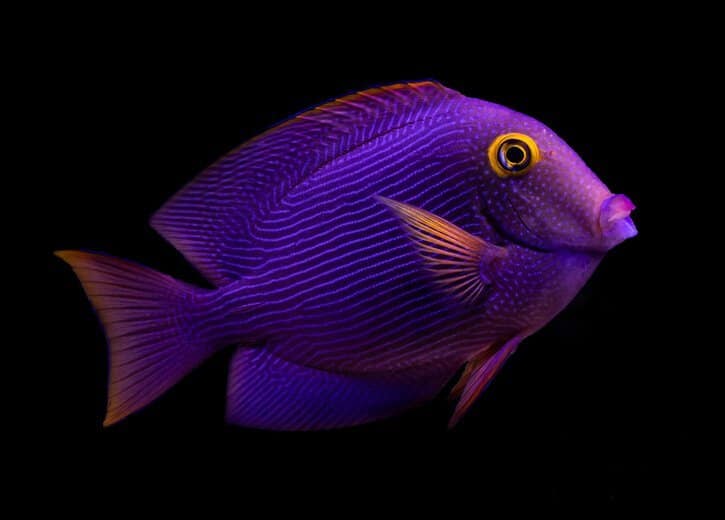 For newcomers to the saltwater aquarium hobby looking for a solution to pesky algae problems, look no further than the Yellow-Eyed Kole Tang. With a bright bluish-purple color and majestic stripes and spots running across the length of their oval body, this fish looks spectacular when fully mature.

Plus, they love seaweed and algae. This forms a majority of their diet and they are the vacuum cleaners of the saltwater aquarium world. For beginners, they will serve as an excellent way to prevent any growth of algae as they are voracious eaters, even compared to the other cleaning fish on our list.

They are not the most docile fish and this is all because of their omnivore diet and insatiable appetite. They are known to go for the smaller crustaceans like pistol shrimps in a tank environment when they run out of algae and frozen feed. So make sure you keep them well-fed. 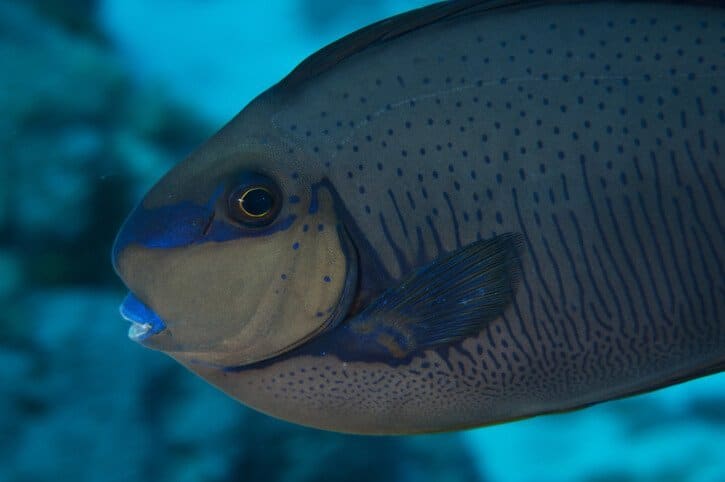 This saltwater aquarium fish is rather rare amongst hobbyists in America. But, it is an extremely pliable fish for beginners. They are a large species growing up to 20+ inches in a large tank with plenty of food.

Docile and regal, they adjust to tank environments quickly and are very clever. They will quickly learn to eat treats from your hand and love a good side rub! They will grow to become the central attraction of any tank they are a part of.

They love to munch on algae and dried seaweed and thrive in larger setups. If you are a beginner with a large saltwater aquarium with a tight lid, we cannot suggest the Lopezi tang enough. They are adorable and hearty fish with a calm demeanor and beautiful silver body. You will love them instantly.

These are our picks for the top 10 saltwater aquarium fish for beginners. They will be easy to handle, help you clean your tank, and easy on the eye giving you the best first experience in this wonderful hobby.