The Secret Life Of Shrimps, Featuring The Coral Banded Shrimp 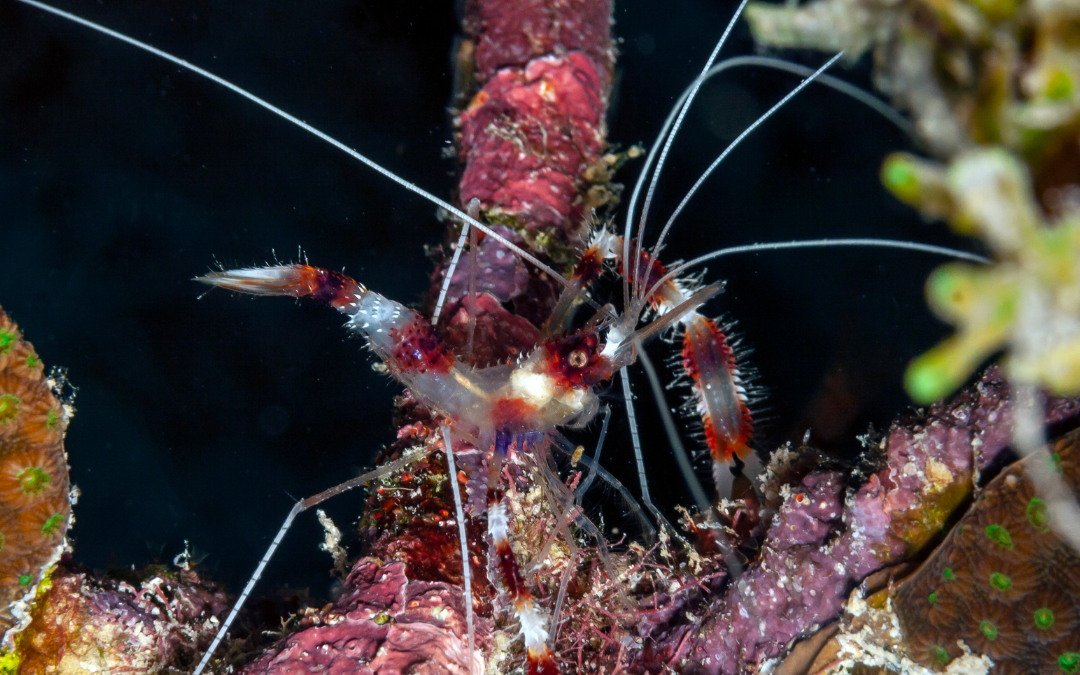 Some of the most exciting animals you can keep in a saltwater aquarium are shrimp! If you keep them in the right conditions, shrimp are generally very easy to look after too. You will need to provide them with suitable shelter to hide in so that they feel more confident, that way they are more likely to explore the tank so you can spot them! Shrimp are also great tank-mates as they often have interesting mutualistic relationships with fish, which varies between shrimp species. The key thing to remember with adding shrimp to your aquarium is ensuring there are no predators that might feast on your latest additions!

This shrimp comes in an array of brightly colored forms! From red and white banded individuals as well as yellow, blue and purple. This is a hardy, nocturnal shrimp species that prefers to hide in caves or under ledges.

We really love the coral banded shrimp (Stenopus hispidus), sometimes known as the boxer shrimp due to the fighting stance it can take sometimes. This species can be territorial and fight off other coral banded shrimp to guard its territory.  It is not uncommon for legs or pincers to be lost during these fights, but these will grow back when the shrimp next molts. They may also harass smaller shrimp species. We therefore recommend they are kept singly or as a mated pair. The coral banded shrimp has an ability that is rare among invertebrates, that it can recognise individuals of its species, most likely through chemical signals.

Coral banded shrimp usually pair off as juveniles and remain together for years. This species lives for roughly 2 to 3 years. They can mate at any time during the year in a tank. During mating, the male will first display a courtship dance in front of the female. After the courtship dance, the male then transfers a sperm sack to the freshly molted female, which then inseminates the eggs and sticks them to the abdominal legs. Their offspring will then hatch after 16 days. The young shrimp will remain attached to their mother for around 6 weeks before they detach, float to the surface of the water and become part of the plankton and drift in the ocean currents. After several molts over many weeks, the young will then sink to the bottom and find a dark place to hide.

The coral banded shrimp has a pantropical distribution in the wild, extending into some temperate regions. Its distribution western Atlantic Ocean from Canada to Brazil, including the Gulf of Mexico, as well as through to Australia, as south as Sydney into New Zealand. They are found on coral reefs that are roughly 2 – 4 m deep, although they have been found in water up to 210 meters deep!

The shrimp will perch near the opening of a cave, ledge, or overhang when they are waving their antennae to attract fish. These locations sometimes become known as cleaning stations. Interestingly, coral banded shrimp really enjoy sharing their hiding places with moray eels, as the shrimps feed on the eel’s body, slime, and any parasites. The shrimp also encourages other fish to take advantage of its cleaning surface and uses its long antennae to encourage the fish to pose for a spring-clean. It will then eat parasites, fungi, and damaged tissue from the fish. Individuals even have the freedom to enter the mouth and gill cavities of willing fish, without being eaten, but usually remain in contact with the substrate when cleaning, just in case. Species that the coral banded shrimp have been known to clean include morays, tangs, grunts and groupers.

Like other invertebrates, the coral banded shrimp is not tolerant of high nitrate or copper levels. Be sure to maintain proper iodine levels in the aquarium to help ensure proper molting, as they will molt every 3 to 8 weeks. The coral banded shrimp must be acclimated slowly to avoid any salinity and/or pH shock. The best method for acclimating shrimp is using the Drip Method, as this seems to increase survival after the stress of shipping.

These shrimp are scavengers by nature and will take most meaty foods. They will readily eat polychaete worms when they are present. In the wild, this shrimp will feed on algae, detritus, and carrion as well as parasites which it picks from fish. In your aquarium, they might need topping up with flaked and frozen foods.

Shrimps in Your Reef Aquarium

There are many shrimp species that would make welcome additions to your reef aquarium. You can read our full blog on the ‘Top 5 Best Shrimp For Your Saltwater Aquarium’ here. There are many shrimp species that can have multiple benefits due to their mutualistic cleaning habits. For example, the Atlantic Peppermint Shrimp (Lysmata wurdemanni) will graze on sea anemones in the genus Aiptasia. Populations of these anemones often grow out of control in the reef tank and will sting and damage the soft tissues of other sessile invertebrates. The pistol shrimp (Cragnon synalpheus) can also be useful in helping stir sand substrate to prevent harmful algae from forming.

While some of the shrimps are wonderful reef tank inhabitants, others are best avoided. There are some species that will feed on corals and their relatives. For example, the hingebeak shrimp (Rhynchocinetes durbanensis) will feed on mushroom anemones, zoanthids, leather corals, and possibly other soft coral species. Our advice is to always research the compatibility of any new addition and slowly add new species. As your tank matures you may find you don’t need as many new additions as you initially thought.

In conclusion, shrimps are a fun and interesting addition to aquariums, but do check that the species you want is well-suited for your other fish or reef aquarium. Don’t forget to send us your wonderful pictures and videos, we love seeing them!