The Horseshoe Crab: A Living Fossil For Your Saltwater Aquarium 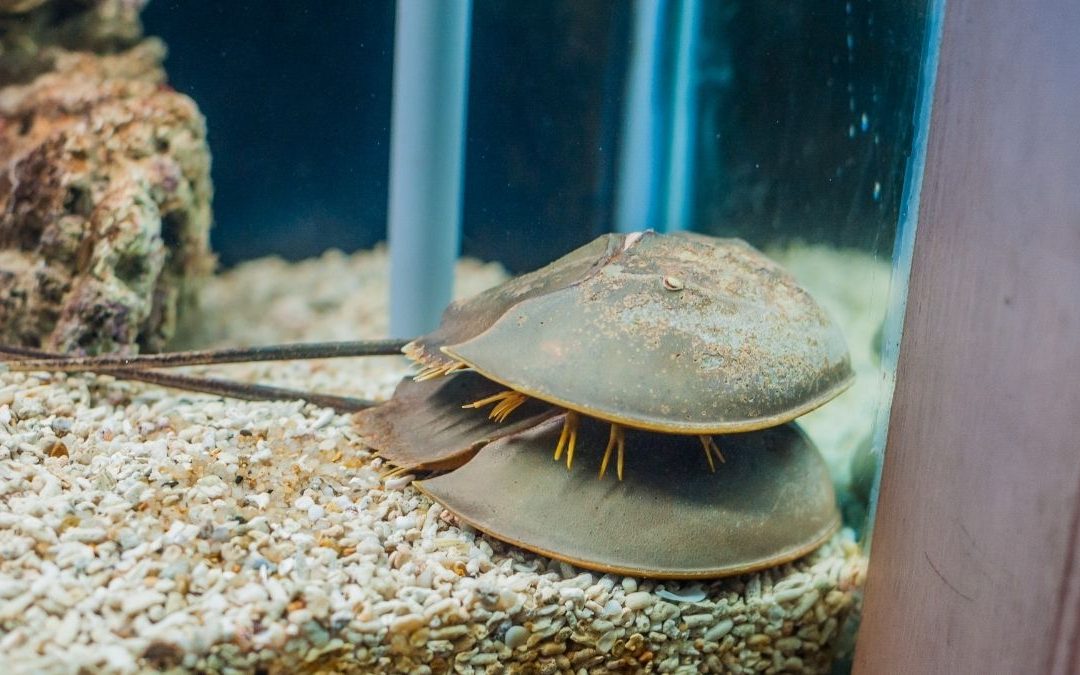 Given their origin 244 million years ago and often called a living fossil, the Horseshoe Crab (Limulus polyphemus) is one of the world’s oldest surviving organisms. What might surprise you is that this species actually isn’t a true crab or even a crustacean, the Horseshoe Crab is more closely related to terrestrial scorpions and spiders. They are also commonly known as an American Horseshoe Crab, horsefoot, sword tail or saucepan. In this guide we’ll help you discover more about this mysterious relic and if you have the tank size, how you can care for it in your aquarium.

It is often described as an armored box that moves or a blue-blooded living fossil, as the basic body shape of this species has not changed in over millions of years. Its body shape is constructed of three main segments: the head, the abdomen and the telson – its spine-like tail. The Horseshoe Crab also has a pair of pincers and five pairs of jointed legs. Similarly, to many other invertebrate species, it will occasionally shed its exoskeleton in a process known as molting.

The color of the Horseshoe Crab ranges from greenish brown to light tan. The dorsal portion of the body is rounded, and the tail is a long spike. Its long tail assists in steering and self-righting when it is upended onto its back. The Horseshoe Crab is more closely related to spiders and mites than to crabs, and belongs to the chelicerates. Horseshoe Crabs are capable of growing to be very large. Female horseshoe crabs are typically larger than males, with bodies reaching up to a foot in length.

The Horseshoe Crab can grow up to 60 cm in length and lives in the shallow waters of the northwestern Atlantic Ocean and Gulf of Mexico, as well as brackish coastal lagoons. It hunts for food in shallow, soft-bottomed environments by plowing through the upper layers of sand and mud. It can effectively shovel sediment around thanks to its massive shield-like shell and splayed rear legs.

It is an omnivorous scavenger, feeding on a variety of different species including molluscs, polychaete worms, seaweed and fish carcasses that it exposes while plowing. The Horseshoe Crab is also an important prey animal for loggerhead sea turtles, while their eggs are commonly eaten by seabirds. Traditionally, their eggs were also eaten by Native Americans.

Because of a group of chemicals termed coagulants, the Horseshoe Crab’s blood is blue and has the peculiar property of clotting very quickly when exposed to such bacterial toxins in very small amounts. Coagulants are used in the testing of prescription medications, medical instruments, and vaccines for sterilization. This is how every FDA-approved drug in the United States must be reviewed. It’s also been used to keep the International Space Station sterile.

Unfortunately for Horseshoe Crabs, no synthetic method of producing coagulant has been developed, resulting in more than a quarter of a million crabs being harvested each year. To curb population decline, new methods are used that only take 30% of the crab’s blood, allowing them to be released alive, although with a significantly diminished chance of survival.

The Horseshoe Crab migrates to the tidal zone to lay eggs during the breeding season. In a series of shallow depressions excavated in the beach sand, 200 to 300 eggs are laid. The male fertilizes the eggs while the female is laying them. These eggs hatch into “trilobite larvae,” which are named for their superficial resemblance to their ancient ancestor. A larva can swim and burrow in the sand when it is about 1 cm long. It goes through a series of molts as it develops, becoming more and more like its parents.

The females dig holes in the sand just above the tidal line during the full moon, at the maximum tide, and lay 2,000 to 20,000 eggs, which the males fertilize. The adults return to the water as the sea starts to recede. Their eggs incubate in the sand for around 5 weeks before the next full moon’s highest tide, when the larvae will reach the water.

Horseshoe Crabs are particularly important to oceanic habitats and economies. Horseshoe Crabs appear to be widespread, but scientists have recently observed a decline in some populations. There is no precise scientific evidence on the demise of the Horseshoe Crab. However, evidence indicates that fewer individuals are present on several beaches during the spawning season. More research is required to ensure that this ancient species is properly managed.

It’s not necessary to be afraid of their spiky telsons. Those tails can appear to be barbs or stingers, but they are actually very delicate. Horseshoe crabs use them to dig, steer, and right themselves after being tossed by a wave or swimming upside down. However, you should never carry them by their telson.

Horseshoe crabs take a long time to mature. They build new, slightly larger shells and shed their old ones on a regular basis because their hard exoskeleton does not expand with them. The phase is known as molting. They’ll repeat this process 16 to 17 times before hitting maximum adult height. Whilst they can start out as only a couple of inches big, they will grow to around 18 inches long, so ensure your tank can accommodate their maximum size.

Since Horseshoe Crabs like to burrow and hunt for food, it’s best to keep them in a tank with a deep sand bed in the home aquarium. As a result, they’re excellent sand aerators. They’re good scavengers who consume worms, algae, and other meaty species found in the sediment. The Horseshoe Crab is reef safe at its small size, but as it grows bigger, it can become more aggressive. Although it may find some food scavenging, its diet should be supplemented with meaty items such as pieces of squid and shrimp.