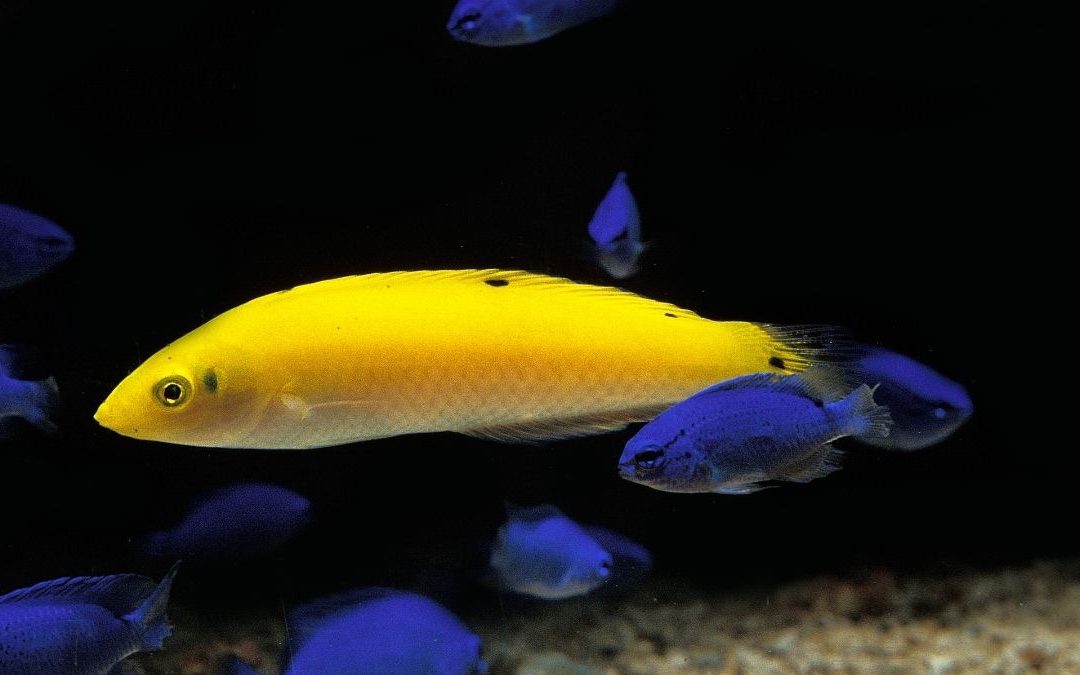 Yellow coris wrasse, also known as canary wrasse or fairy wrasse, is a colorful species that adds a lot of mid-tank activity and a pop of bright color to your tank. Their bright scales become almost reflective under aquarium lights and they are beautiful to observe.

All budding aquarium hobbyists would have encountered a flatworm problem at some point. The yellow coris wrasse is a brilliant way to tackle this ever-present and incredibly tough problem. Apart from flatworm it can also consume pyramidellid snails and algae and any other pests under the size of 5 inches. They are not aggressive with their behavior since they are not territorial.

Get Rid Of Your Flat Worm problem

These Yellow Coris Wrasse will constantly be looking for Flat worms in your saltwater aquarium. So if you have flatworms in your water tank setup it can deplete your aquarium of all the minerals that the rest of the aquarium’s inhabitants need. Yellow coris wrasse has the ability to search through the thick layer of substrate and eradicate all the flatworms that your saltwater aquarium might have.

If there is a shortage of flatworms or any other pests in your aquarium you should also be mindful of the fact that they need pests to survive as well. Be mindful to have enough flatworm feed so that you can feed them even if you don’t have a pest problem in your water tank. Yellow coris wrasse must have enough food every week.

Having a Yellow coris wrasse is always a blessing even though there are reports of them being a nuisance to other members of an aquarium like corals. That rarely happens and even if that were to happen it’s mostly because they are underfed or because of the lack of any space in the aquarium.

As long as they have room to move about and spots to nestle into, they are great reef tank additions. So if you have the minimum tank size of 40 gallons and feed them regularly, they are a wonderful to have.

Yellow Coris Wrasse are extremely popular in saltwater aquarium setups and many different tank-bred varieties are available. These varieties tend to be hardier and are better suited to life in tanks.

They are found in bright yellow color, and they are usually found hiding under the sand in the wild. When they are young they have a lot of black patches on them which recede to one dominant black dot in their body.

They sport a black spot near their dorsal fin. And this gives them presence and a distinguished appearance. In the wild, a Yellow Coris male has several females and they form breeding pairs. The females are generally smaller and less colorful. Almost all wrasse are born female and later, the dominant female turns into a male when there is shortage of breeding males in the school. You can also find “super males in the wild “who are born male and remain that way throughout.

When they are fully matured, they grow up to the size of 5 inches. They are also known in the aquatic world under various names like – golden rainbow fish, golden wrasse, yellow coris and canary. Their habitat ranges from the Pacific Ocean to the edges of Eastern Indian Ocean.

In captivity, they must be fed with a varying diet of meaty foods like krill, raw table shrimp, clams or even mussels. They not only protect the reef system in aquariums, they are also protecting other fishes and the coral system by feeding on worms and other pests that may or may not hurt the ecosystem of the saltwater aquarium.

They come from a family of Halichoeres genus and they can be considered as a model citizen in your aquarium. They are not very aggressive towards most other tank mates. But, they tend to show some aggression towards other species of wrasse in the same aquarium. So it is best to have only one wrasse species, to avoid unnecessary scuffles and injuries. Another issue with this breed of fish is their tendency to jump out of the water when they are stressed. So, it is highly recommended to have reinforced covers for your tank.

The tank should be lined with rocks that give the fish natural crevices and shields from predators and tough currents. Yellow coris prefer a well-lit aquarium but there should be shaded areas as well. They also appreciate a thick layer of substrate as they burrow when they feel threatened. .

Yellow Coris Wrasse are not just a great addition to your tank because of its bright yellow colors and its beauty, they are also functional fish that keep your saltwater aquarium neat and tidy without any pests.They are very suitable for saltwater aquariums since they are small ,hardy, easy to maintain and easy to care for. They are mostly non- aggressive as they tend to mind their own business and hunt down all the pests in its vicinity.