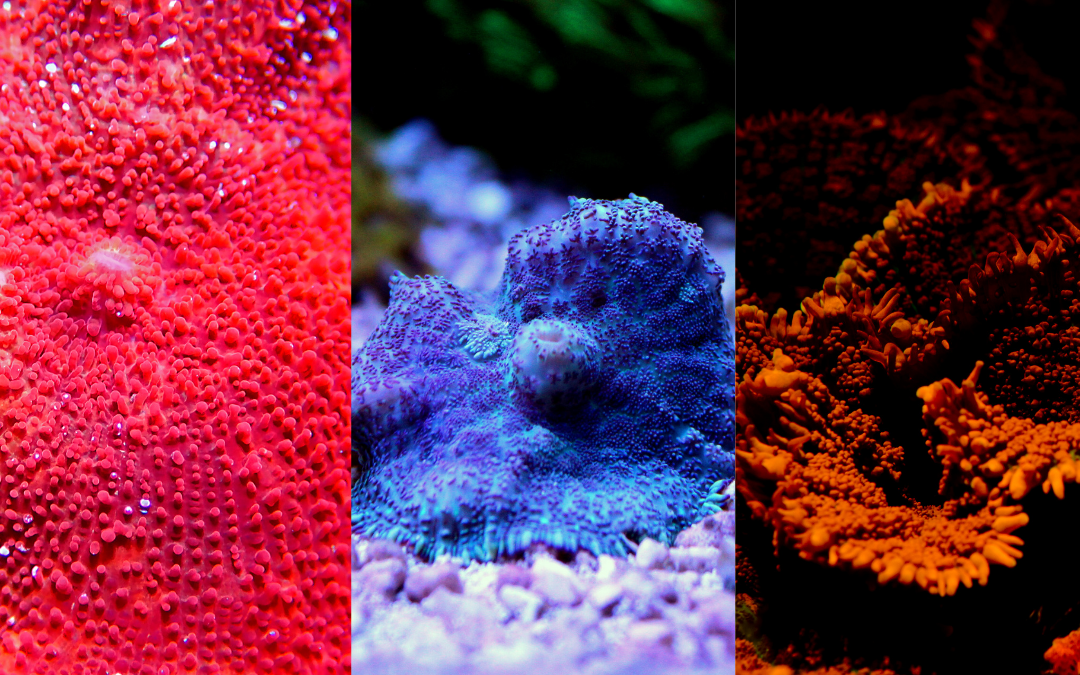 Mushroom corals come in a variety of species including Rhodactus sp. and Actinodiscus sp. Mushrooms are distinct from all other corals by their oval disc shape. Mushrooms are distinguished from all other corals by their oval disk shape. They have a flat or round disk-shaped umbrella around the opening or the mouth. They have tentacles on their disks that look almost like tiny bumps. Mushrooms are probably the easiest coral to take care of. They are perfect for beginner aquarists because they are not challenging in terms of the conditions they need to thrive, even though they do well in low flow. Besides being affordable and their range of gorgeous colors, it’s hard not to make space in your tank for a coral mushroom.

Mushroom corals are generally found in lower light, nutrient-rich environments, which makes them somewhat ideal inhabitants in a mixed species tank including fish and coral, and easier to care for than some of the most finicky coral species. They have symbiotic photosynthetic zooxanthellae and require low to moderate light, are not picky about flow, and can be kept in less than pristine conditions.

The Actinodiscus Mushrooms are also referred to as Mushroom Anemones and Disc Anemones. They were previously in a genus called Discosoma. These invertebrates display a wide variety of colors, textures, and patterns. Some are solid colors, whereas, others are striped or spotted. The taxonomy of the various species is in a state of flux, and will probably continue to change.

They are tough and moderately simple to maintain. In general, a medium light level is needed and should be lowered in the aquarium if the light intensity is high. Actinodiscus Mushrooms prefer a low to medium flow of water inside the aquarium, although different species can have different requirements. They are semi-aggressive and need sufficient space between themselves and other coral and sessile invertebrates.

Actinodiscus Mushrooom derives some of its nutritional requirements by photosynthesis of the symbiotic zooxanthellae algae that it hosts. It also feeds on other nutrients and particulate matter and benefits from additional food in the form of microplankton or brine shrimp fed to each colony polyp.

The Superman Rhodactis Mushroom Coral (Rhodactis sp.) comes in a luscious red color on a blue background. This along with its rich texture will make this genus the ruby of your aquatic tank.

The Rhodactis Mushrooms are a comparatively typical variety of Corallimorpharia and are located throughout the Indo-Pacific Sea. In its natural surroundings, the Rhodactis Mushroom lives in a shallow, warm and comfortable environment of water. Just before you put this mushroom right in your container, it is important that you verify that your deep sea fish tank’s water temperature is between 72 and 78 degrees Fahrenheit, the flow of water is right as well as that you offer it lots of lights. Rhodactis live on free-floating bacteria, so the movement of water can be intermittent or revolving.

The Blue Rhodactis Mushroom (Rhodactis sp.) comes in a solid sky blue mushroom, it also has a rich texture which will add depth and variety to your tank landscape.

The Rhodactis Mushrooms are a relatively typical range of Corallimorpharia, as well as located throughout Indo-Pacific Sea. Often referred to as The Tonga Blue Mushroom, The Titan Eco-friendly Metallic Mushroom, The Hairy Mushrooms and also The Tiny Elephant Ear Mushroom, this splendid microorganism is simple to care for and also would certainly give a fantastic exotic feel to any marine reef aquarium.

You will have to keep in mind that the Rhodactis Mushroom duplicates by the usage of fission or laceration, so there is a considerable hazard of too much development. This might at some point end up being a problem. A tiny polyp removed from the base or mouth of the moms and dad polyp as well as expands to complete dimension in just 2 months.

Mushroom corals will move around, and they’ll likely move around your tank to the position they want. Resistance on the part of the owner of the tank is usually futile. You may find mushrooms going from back to front, back-to-back, side to side, anywhere but where they were meant to be, up to the point where they disappeared, only to be seen again, in a totally different location, a few months later.

If your lighting intensity is too poor for your mushroom, it can lose color and occasionally change its form a little when it attempts to access the light. This could make it look a bit like a funnel. When the level of lighting is right, the coral of the mushroom will be fully open and shall lie flat on the surface to which it is attached. If the level of illumination is too high, the mushroom will remain somewhat retracted much of the time, and will typically begin to lose its color, giving it a “bleach” appearance beginning around the edges.

As these corals contain zooxanthellae within their bodies, they will be able to get much of their nutrients from the lighting of your tank. This is why it is important to have the correct level of lighting in your tank and to watch for signs that your level of lighting might not be accurate. Mushrooms can also get nutrients from the water in the form of microplankton and zooplankton and benefit from occasional spot feeding. They’ll do their best when they get the nutrients they need from both the water and the lighting on your tank.

Since mushrooms do not have a calcified skeleton structure, they may be more forgiving of alkaline, calcium, and magnesium swings compared to other corals. They would not, though, be particularly tolerant of pH, temperature or salinity fluctuations – which is no different from any other coral or fish species.

While mushroom corals can tolerate a wider range of water parameters, they will thrive in stable water conditions as detailed below: