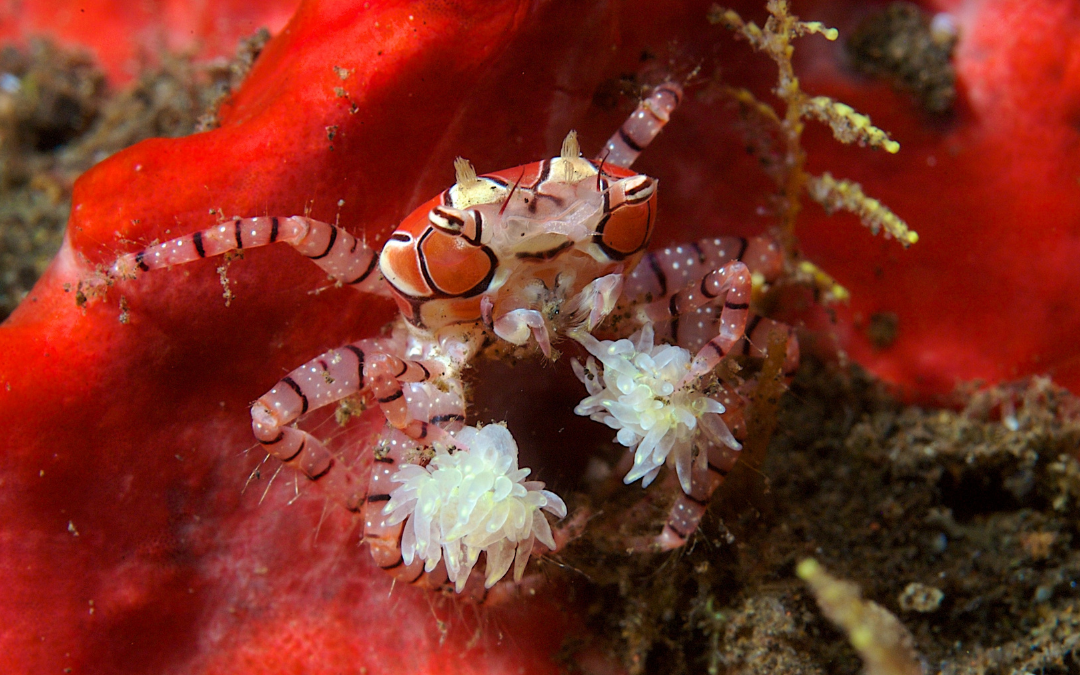 Crabs are an amazing crustacean. There are so many wonderful and weird species of crabs out there, and lots are suitable for saltwater aquariums! Many of these are also pretty easy to look after, so suitable for beginner hobbyists. Today we are taking an in-depth look at the pom-pom crab. A species that is hardy, non-demanding, and really fun to have!

This species of crab is native to the Pacific oceans, being found in the water around the Hawaiian islands and Indonesia. The Hawaiian name for the crab is kūmimi pua, which means ‘inedible flower crab’.

When it comes to the pom-pom crab and the anemones, their symbiotic relationship is all about supporting and protecting one another. The crabs will use the anemones for defense, holding them up to potential predators for the anemones to sting. The anemone is also helpful with catching small prey for the crab.

In return, the crab provides the anemone with little bits of food and protection. It is a wonderful relationship and one that is amazing to watch in your aquarium!

These crabs are pretty small, never growing more than an inch. This means that they are suitable for nano tanks or smaller tanks.

Not just interesting to watch because of their symbiotic relationship with anemones, pom-pom crabs also have beautiful colorations and markings on their bodies. Its body is a mixture of white and tan colors which provide a type of camouflage for them. Even though these crabs have a defense mechanism, they do prefer to stay out of the way of potential threats. They spend a lot of their time hiding out in rockwork, coming out when they feel safe. They will come out often at night, patrolling the tank!

You will sometimes catch your pom-pom crabs swaying with their anemones in the water current, collecting food and debris for itself and the anemones.

How Easy Are Pom-Pom Crabs to Look After?

These crabs are suitable for beginners. They are pretty hardy creatures and not too fussy, however, they do prefer a tank with a lot of hiding places. They should be added to a well-established tank as they can suffer when in an environment with unstable salinity.

They are also great at cleaning up the tank, spending time picking at the live rock and scavenging. They will eat any leftover food and zooplankton that might be floating around the tank.

They should also be fed often with an array of meaty foods. They enjoy snacking on mysis shrimp and clams.

These crabs will molt. If you are new to looking after crustaceans, seeing an exoskeleton can be a bit strange at first! It does look just like a dead crab at first glance, however, when you look closely you can see it is the exoskeleton of the crab. The pom-pom crab might go into hiding after molting as it likes to stay safe until its new exoskeleton hardens.

What Tankmates Are Appropriate For the Pom-Pom Crab?

These crustaceans are pretty docile, not really aggressive to fish and other crustaceans. They are reef compatible, however, you should be cautious when adding them to a reef aquarium. The anemones in the crab’s hand might accidentally sting corals. Because the anemones are small, the damage will probably not be huge, however, do keep an eye out on any injured coral. The threat to healthy fish and corals is not that big though, and the pom-pom crab can be peacefully kept with a whole range of marine life.

They are suitable to be housed with bigger fish, as long as these fish do not eat crustaceans! Because these crabs are small, some fish might see them as a tasty little snack.

They are also suitable living with other pom-pom crabs as they are not too territorial or aggressive. The only issue you might face with more than one pom-pom is fighting over anemones, but we will talk about that a little bit later!

What Happens If They Lose an Anemone?

A concern that many hobbyists have when they are thinking about bringing pom-pom crabs into their saltwater aquarium is that of the anemones and what will happen if they lose them. They might lose an anemone during molting as this is the only time where they put their anemones down.

Thankfully, pom-pom crabs don’t need their anemones to survive and can live happy and healthy without them. However, they do prefer to have their anemones. Because of this, the crabs are known to frag their one remaining anemone and creating another anemone! Both anemones will survive and grow to a bigger size.

If both anemones are lost, they will steal anemones from another pom-pom crab. They will take one of the anemones, leaving the other crab with one, and split it, creating two new anemones. This is an amazing thing to witness and it truly shows how smart these crabs are. Check out this video by National Geographic that shows this taking place.

If there are no anemones in your saltwater tank, and your pom-pom crab has lost both, it will try and make little boxing gloves out of a range of creatures! Hobbyists have reported their pom-pom crabs carrying around frags of zoas or sponges.

Are Pom-Pom Crabs the New Crustacean for You?

These crabs are incredible additions to your saltwater aquarium. One of the most interesting small crabs out there, they are wonderful to watch and their relationship with the anemones is really interesting. We sell pom-pom crabs for $29.99 and will always arrive healthy and in excellent shape!