How To Encourage Shy Fish Out From The Rockwork 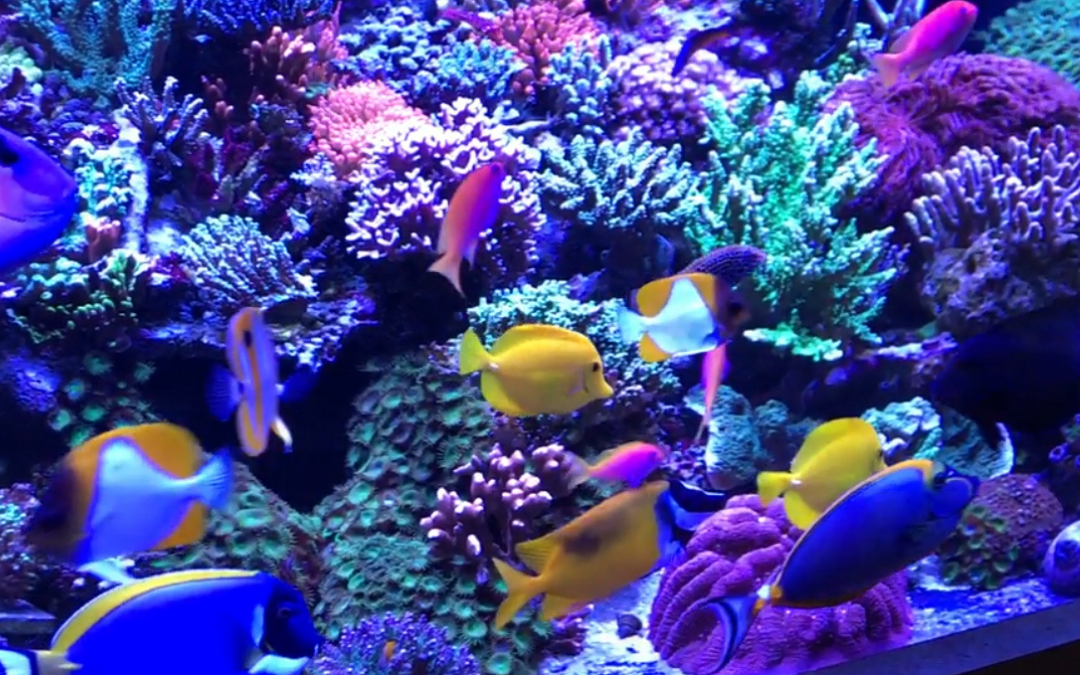 Are your saltwater community fish shy or spending too much of their time hiding? Well, if you’ve noticed this behavior, don’t worry. This is not unusual, even in a peaceful saltwater aquarium that contains a large amount of live rock. Social fish species are actively searching for possible predators all the time when in the wild. While these instincts remain with the fish even in captivity, being continually anxious and “guard” is not natural behavior. Your aquarium is a sheltered environment for these fish, so we suggest this behavior might be due to the distribution of fish species not being balanced.

If a new fish has just been introduced to the tank, the most likely cause of hiding is that it actually feels uncertain about its new surroundings. This is especially true of non-schooling fish species, which sometimes prefer to claim a clear territory that they can call home. Within a few days, a new fish should be happy in its new home and spend more exploring the aquarium. If your new fish continues to hide for more than a week, then there is likely another problem causing their nervous behavior. Until you can identify and correct the problem, the new fish will continue to remain hidden.

If fish stay concealed for more than a few days, then the issue might be being caused by your other fish in the tank. Even fish who were not formerly bullies often can show aggressive tendencies after the addition of a new fish. The most likely reason for this is that established fish that have previously secured a territory for themselves may now feel the need to be very protective of their territories from a newcomer.

A perfect way to tone down this aggressive behavior of existing fish is to rearrange the decoration in the aquarium. When you dissolve any former territories, all the fish must start fresh; there are no more established areas left for one fish to protect. Don’t be surprised, however, if all of your fish at first get scared of the new surroundings and go into hiding. Whilst the bullying problem may be solved, it will still take a few days for new territories to be established between the tank-mates.

Many fish don’t feel secure unless they have a place or two of their own where they can hide if they feel threatened. Providing more hiding places that are always available will actually encourage fish out into the open as they know they can quickly dash off to one of the many nooks and crannies if they feel at all threatened. When a fish feels safe, they will begin to explore more too!

Feel free to get creative with how you arrange your aquarium. For example, you could stack rocks or rubble to make caves or use broken pieces of clay pots. Adding pieces of interesting driftwood that have holes or arches is also great. Plants are also an attractive addition that will have added benefits of improving water quality and providing alternative food sources for your fish. There are a lot of options you can explore here. If every fish knows that they have their own personal hiding places, your fish community is likely to become more playful and active.

The term dither fish refers to an arbitrary group of aquarium fish, typically used by aquarists, to help alleviate inherent timidity and aggression, as well as to encourage normal social behavior in other fish in the same aquarium. Dither fish are an effective way to encourage shy fish to come out in the open as a small school of dither fish almost act like watchdogs,  giving the rest of the fish in the aquarium a sense of security. By constantly being out in the open, dither fish help reduce anxiety in nervous fish species by showing them it is safe to leave cover and eat the food that has been given to them. They also typically swim near the top of the tank, which further reassures other fish that there are not any predators nearby.

When choosing a school of dither fish for your aquarium, it is important to choose species that are naturally sociable and will form a tight school. Species such as the Blue/Green Reef Chromis and Tetras are some of the many peaceful Cardinalfish, are great choices. In aquariums large enough to accommodate several different schools of varying species, Cardinalfish of different species will join to form a single large school which creates a really dramatic effect. We highly recommend choosing at least three individuals of the same species in order to avoid any aggressive behavior, which will not encourage shy fish to feel safe. It is also important to establish whether your aquarium is large enough for your new additions and that it has sufficient filtration.

Some fish species are nocturnal (meaning they sleep during the day and are active at night) and some are diurnal (opposite of nocturnal) and are active during the day. If you have a fish that is usually more active at night, under the cover of darkness, you will find that it appears to hide from the bright white lights above your tank. Examples of nocturnal fish species include Groupers, Squirrelfish and Soldierfish.

Sick and injured fish will also hide and try not to be seen until they recover. This is where it becomes important to know your fish and be able to recognize when a usually bold or confident fish is showing unusually shy behavior. If you believe one of your fish is sick or injured, you need to carefully place them in a quarantine tank and contact a vet as soon as possible.