Five Most Beautiful Wrasse For Your Saltwater Aquarium 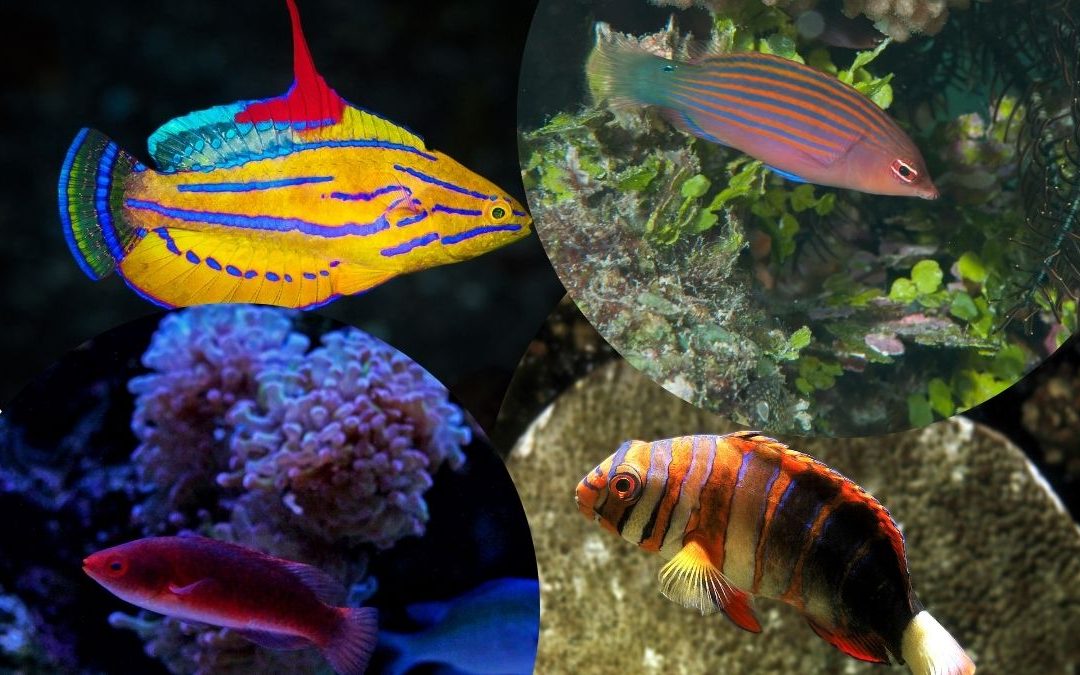 Marine fish come in the most exquisite colors, shapes and sizes. It’s not hard to see why aquarium hobbyists love them so much and exhibit them in some of the most stunning saltwater aquariums in the world. With up to 20,000 recognized species, it can be hard to pick a favorite; in this blog, we’re going to go over our personal favorite wrasse varieties that would make great additions to your saltwater aquarium.

Firsty, Why Are Wrasses Such Excellent Aquarium Fishes?

Most wrasses make excellent aquarium specimens, but some are recommended only for specialists. Although others have unique treatment needs, there are wrasses that can delight novices and experts alike. It is clear that wrasses, like any aquarium inhabitant, require acceptable living conditions; the aquarist must pay heed to the normal considerations of water quality, the availability of adequate swimming space, adequate aqua-scaping and high-quality feeding.

Most aquarium wrasses are very much reef fish and can benefit from aquascapes that use a lot of open, live rock systems that allow them to display their wild behavior; they spend a lot of time swimming in and out of the reef, sheltering and searching for different prey items in equal measure. Many genera, for example, need deep sand beds for shelter. Some are confident and very tough, while others are quiet and retiring. The thing is, there’s a wrasse for everyone and every tank.

The fairy wrasses are a nice addition to the coral aquarium. Scott’s Fairy Wrasse is our pick (Cirrhilabrus scottorum). With the potential exception of tiny, fragile shrimps, these wrasses do not generally affect invertebrates. Fairy wrasses are timid when first added to the aquarium, sometimes hiding for a few days. But if there is a peaceful acclimation phase, they can become very bold, up to the point of nipping the aquarist’s hand or forearm while they clean the aquarium. The secret to successful acclimation is to position them in a non-aggressive species aquarium. When exposed to a tank of hostile fish, they usually remain concealed and end up dying of malnutrition or succumbing to disease. It is also critical that there is minimal human interaction inside and outside the aquarium during this acclimatization time.

Although smaller fairy wrasses are a reasonable option for beginners as well as experienced hobbyists, larger individuals frequently have considerable trouble adapting to captivity. The larger males are also much more vivid than the juveniles or females and are often a more attractive choice for the aquarist.

It is necessary to feed these wrasses at least twice a day to ensure that they do not become malnourished and ultimately perish. Many foods can be approved, but a selection of finely chopped fresh seafood (e.g. shrimp, marine fish meat), frozen mysid shrimp or a healthy frozen cooked meal will help to preserve their color and health.

The Six-Line Wrasse (Pseudocheilinus hexataenia) is both beautiful and active. With its six separate, horizontal blue lines overlaid with an orange body, this member of the Labridae family adds a zip of color to every marine reef aquarium. This is particularly true when the courting male Six Line Wrasse shows an improved color strength. However, it is the active dart between the rock outcroppings and the corals that most draws the Six Line Wrasse to any audience.

While usually peaceful, the Six Line Wrasse can behave aggressively against peaceful Wrasses and other easily-intimidated fish, particularly if it is undernourished or if its habitat is empty of places where it can hide. The Six Line Wrasse diet should contain vitamin-enriched frozen mysis shrimp, vitamin-enriched frozen brine shrimp, and other meaty foods along with high-quality marine flakes and marine pellet foods.

The Carpenter’s Flasher Wrasse (Paracheilinus carpenteri) and McCosker’s Flasher Wrasse are our favorite flasher wrasses (Paracheilinus mccoskeri). These wrasses are easily adapted to captivity, particularly if they are housed with other peaceful fishes. They’re better kept in small groups, but make sure you add them all at the same time or place the less competitive females in before the male.  It’s best to house just one male flasher wrasse per tank. Housing multiple males of the same species can be done, but it does come with an element of danger. Usually, one of the males (usually the largest of the pack) will incessantly continue to constantly pick on the other males, which typically ends in the bullied male’s demise. One of the most satisfying aspects about keeping flasher wrasses in groups is that males will show off if females are present. These colorful displays are important to their courtship. At times, solitary males will “flash” at their reflections in the glass of the tank.

With the potential exception of close relatives (e.g. fairy wrasses) or other small planktivores (e.g. fire gobies), flasher wrasses are seldom hostile against other fish. These occasional bouts of aggression typically include showing or, on rare occasions, pursuing a newly released fish. Flasher wrasses also have invertebrate foes; they have been known to be the prey of predatory crustaceans (e.g. large hermit crabs, cancrid crabs), Elephant Ear Polyps (Amplexidiscus fenestrafer) and Carpet Anemones (Stichodactyla spp.).

Flasher wrasses should be fed two to three times a day to control their body weight. Since they feed on zooplankton and rarely pick live rock organisms, they will not thrive in the reef tank if they are fed infrequently. Good protein skimmer and Live Sand can help to reduce the build-up of dissolved organic matter that can come from this more frequent feeding regime.

The Harlequin Tusk Wrasse (Choerodon fasciatus) originates from the Indian Ocean and Australia. Indian Ocean Tusks have orange lines with white borders and a touch of blue on the tail of the fish. Australian Tusks have orange streaks with bright blue borders beginning from the pectoral fin, back to the tail of the fish. All of these lovely colored shapes feature light blue teeth or tusks used to crack invertebrates. They’re a perfect fish for a FOWLR (Fish Only With Live Rock) tank. These fish are usually shy when they are young, but in time they can develop personality and trust as they mature.

A 125 gallon or larger aquarium with lots of live rock for hiding places and mildly aggressive, active fish like Angels, Tangs, and smaller Stimuli is an acceptable environment. Hold just one specimen in each tank. While they will not disturb the corals, they will eat some small crustaceans, such as snails or crabs.

Any hobbyist, at one time or another, should get a wrasse, or even a couple. There’s a wrasse for every hobbyist, every tank, every ecosystem. With care, attention, proper study, and foresight, this stunning community of fishes will continue to be rewarded.