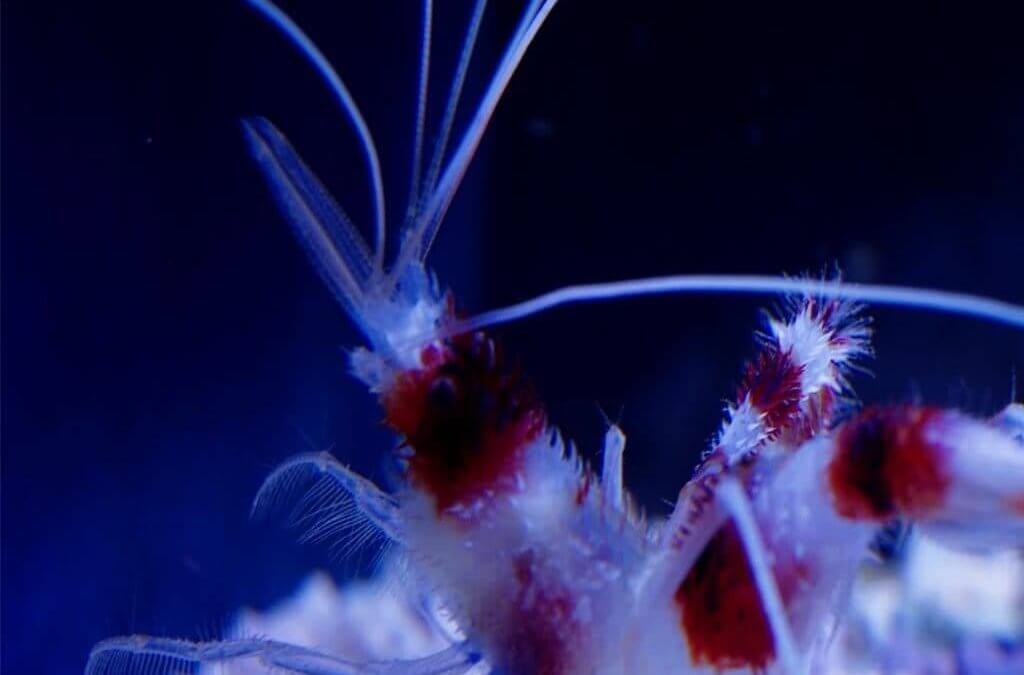 These colorful decapods are a delight to have in any aquarium. They add a lot of color and character and are extremely fun to observe. These shrimp-like creatures are extremely versatile, durable, and easy to care for and have become one of the most popular marine aquarium additions.

Being a decapod, they have 10 legs. These crustaceans have bright red and white bands that run along their body and first set of pincers. They have a total of two sets of pincers. One set of pincers are found on their front two feet. They are strong and are used for displays of territorial dominance, mating displays, grabbing food, and fighting. They have a smaller set of white pincers on their next line of feet. These are used for exploration and additional support while feeding.

They are nocturnal creatures that use crevices in rocks and other dark areas in a tank to nap and become active during the night. They look for small worms, algae, and pieces of fish in the tank to eat. They are not active hunters but could chase down worms in their environment.

What makes them so popular is their mating display, their tendency to be monogamous and bright colors, and active persona. A tank usually houses a male and female. Their mating ritual dance is a very cute and highly documented behavior in decapods. Male coral banded shrimp have blue undersides and females have blue and green undersides

As they are territorial, it is not advisable to have two males. They fight aggressively and lose pincers or limbs which regrow in 30 days.

They also shed their exoskeleton periodically. This is a good indication of their health. Since they move in a unique, crab-like way – they are extremely mobile across the tank. When they are active, they move constantly putting on an impressive display.

They live for 2-4 years. They can survive in a 72F temperature but are robust with fluctuations. Their other limbs are used for sensing the environment and detecting prey. These shiny white antennas float around and add to their beauty. They are scavengers and can feed on a range of diets including worms.

Coral Banded Shrimp bring life and movement to the tank. They thrive with coral feed and the rocky terrain of a large tank. Make sure you release only a mating pair into a tank and watch out for unwanted offspring too. The eggs are easy to spot and dispose of. Also, they can be aggressive, so watch out when you introduce a new one into the tank.

They are best enjoyed in a well-lit tank with plenty of food for them to scavenge. Coupled with bright fish, they add a new dimension of floor dwellers to the tank and their distinct behavior as a pair can make for great viewing. They combine a tank-cleaner with a marine addition with a quirky and lovable personality which has made them so popular.