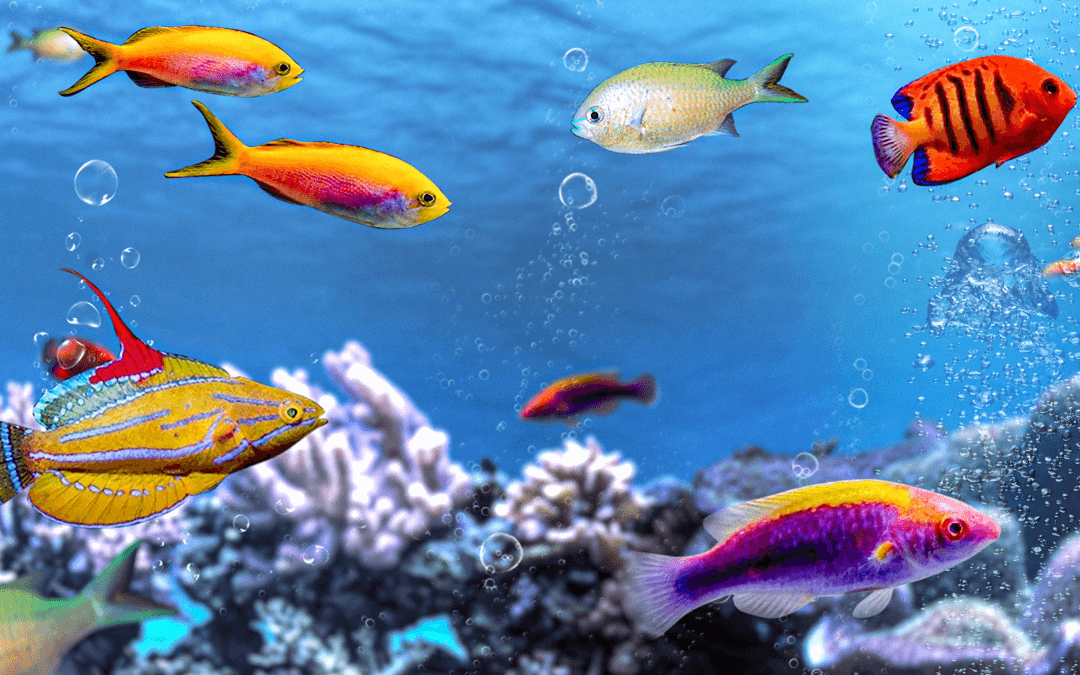 When it comes to planning and decorating a new saltwater aquarium setup, the bottom of the tank is a problem that solves itself. There are plenty of reefs and reef-loving fish to choose from, making this an easy task. But what most beginner ( and some experienced ) tank owners struggle with is the top half of the tank.

Most tank setups are dominated by the area around the primary reef structure and the fish that live in and around it. But the huge area above the reefs and the rock clusters are often forgotten, decorated with just light fixtures and filters.

For a well-rounded tank that has activity all over and an attraction at every corner, some fish need to be brave enough to swim at the surface. There are a few issues when it comes to finding fish that will predominantly roam around close to the top in search of food.

One is that they are very few in number. Saltwater fish are very wary of pointy beaks diving in from above. Birds actively hunt reef fish and wandering too close to the surface is a risky strategy for our finned friends. This is why most saltwater fish tend to stick to the reef in the relative safety of other fish.

Secondly, fish that dwell near the surface of a water body are scavengers who eat insects and dead scarps that float. This behavior has given them upturned mouths capable of gulping down large chunks. This, in an aquarium setting, could lead to a few scuffles.

But fret not. We have handpicked the best 5 fish that tend to stick to the top half of a saltwater aquarium. These species do not require any special attention and are not especially aggressive towards tank mates. And they are great to look at and will add that much-needed pizazz to the top half of your tank.

Anthias are a saltwater aquarium addition quickly becoming the favorite for many hobbyists around the world. These small, quick, and colorful fish come in a variety of colors and shapes. There are close to 30 sought-after Anthias species for saltwater aquariums and they are all extremely lively and colorful additions to your tank setup.

Discovered in 1758, these fish predominantly occupy tropical oceans and are found in small groups of about 10-15 fish, usually with one dominant male. All Anthias are born female and in the absence of a male anthia in a group, the dominant female will usually switch gender and become the male. Male anthias are generally more colorful and flamboyant to attract female mating partners.

Since they are extremely active swimmers, they like the open space on top of the corals. But. you must ensure a few rocks stacked-up or tall reef plants for them to quickly hide, incase they sense danger. This will encourage them to swim higher up, provided they have a quick escape route.

Also, the tank needs to be closed and sealed tightly since they are known to jump pretty high when threatened.

The most sought-after and best species of Anthias include the Bartlett Anthias and the Lyretail Anthias. The Bartlett Anthias sport a beautiful blueish-purple hue (especially the males) and a wavy forked tail-fin that sways brilliantly in the currents. They also have bright yellow dorsal fins and add a streak of color as they dart around the tank. The Lyretail Anthia males are truly magnificent looking fish with a swooshing long protuberance from the dorsal fin that makes them look majestic. They are bright and active swimmers and are often seen exploring every corner of the tank.

A group of one male and two females is a perfect starting point when introducing Anthias to a tank. This avoids territory disputes between the males and ensures good companionship as they are very social fish.

A species high up on any experienced or beginner aquarium hobbyist’s list, the Green Chromis is a very robust and active fish that elevates any aquarium with its personality and demeanor.

For a species of damselfish (notoriously aggressive), the green Chromis is a great tank addition when introduced early and socialized with other tank mates. Small and active, they tend to be extremely mobile and have a very curious and exploratory personality.

They tend to move towards the top of the tank during feeding time. If they are trained to receive food from the top, they will definitely become top-dwelling fish (even though they keep moving all over the tank environment). Being extremely food-motivated, they love being the first to eat, making them perfect additions to occupy the first 4 inches of a tank.

They have a unique, reflective blue body that shimmers green when the tank light bounces off them. Though they are not predominantly top-dwellers like the anthias, they tend to spend a lot of time looking down on the coral, awaiting food from above. Be careful of your fingers though as they can get very nibbly during feeding time.

They do well in medium-sized schools of 4-5 individuals but one dominant male is the best bet as they do have the aggressive damselfish gene in them. But they will bring a delightful active and responsive presence, acknowledge feeding time, and add a splash of color to the tank.

When it comes to a mix of beauty and activity – none come close to the fairy wrasse. They come in all different color combinations and shapes and are one of the most unique and beautiful saltwater aquarium fish.

Male fairy wrasses usually have much brighter shades of blue, pink, and purple and are absolutely stunning. They will quickly become your favorite and the cynosure of all eyes in your tank.

Most fairy wrasses range from 3-7 inches in size and do well in medium to large aquariums. Males tend to be aggressive towards other males and it is a good idea to build a fairy wrasse population with one dominant male. But, they are generally calm fish with very few cases of outright aggression towards other tank inhabitants.

The best species of fairy wrasse for saltwater aquariums are the Lubbock Fairy Wrasse and the Flame Fairy Wrasse. They are both around 5 inches fully grown and are very calm and beautiful fish. The Lubbock Wrasse sports bright rainbow colors with dominant purples, oranges, and yellows characteristic of Wrasses. The Flame Fairy Wrasse is a special fish that looks stunning under aquarium lights. Sporting almost iridescent yellow and orange highlights, this fish looks like a fireball hurtling through the tank. The males are generally brighter with characteristic red bands near the yes.

Possibly the most beautiful fish on this list, the Flame Angelfish is the darling of the saltwater aquarium world because of its fiery orange body with deep, hypnotic, matte-black stripes that give it a stunningly intense and unique appearance.

Their active disposition and constant feeding make them a roamer with most flame angelfish choosing to swim around the tank looking down on the reef for algae deposits. This behavior is perfect for tank owners looking for a bright and beautiful fish to add some activity to the top half of the tank.

They are peaceful, omnivorous fish that get along with all other tankmates. Although two males in the same tank is a bad idea, a few flame angelfish with one dominant male is a good strategy of introduction.

They can be fed a range of algae and shrimp based feed. A regular feeding schedule will keep them happy and give them more freedom to peruse the tank from above. If they are hungry for long periods, they tend to enter the nooks and crannies between corals in search of algae.

They are one of the most sought after tank fish for their great colors, calm demeanor, robustness, and ease of care. But beware, they can jump when startled and the tank needs to be sealed tightly to avoid accidents.

Another sub-species of the Wrasse family, the flasher Wrasse sticks true to its name. One of the most frilly and colorful saltwater fish around, this wrasse species is known for its incredibly intricate patterns, shapes, and beauty. A flasher Wrasse in a saltwater aquarium will quickly become the center of attraction of the tank.

The male Carpenter Flasher Wrasse is a stunning little fish. A frilled and fanned dorsal and tail fins, bright blue/purple markings, and streaks across the broadside and an impressive protrusion on the dorsal fin give this fish an imposingly attractive presence in the tank. Coupled with a bright red/orange body and active personality, these fish tend to venture into the top half of the tank for extended durations, especially around feeding time (if a feeding pattern is established early).

The McCosker Flasher is another extremely attractive species. A bright orange/red body with luminescent, reflective aquamarine blue highlights, frilled and splayed fins all around, complete with shiny blue stripes makes this fish a gloriously decorated presence. The McCosker Flasher can single-handedly add that extra oomph to your tank.

Combined with their active persona and comfortable tank environment, they will grow braver with time and start drifting about the reef for longer durations. They are not a complete top dweller by nature. But, combined with a regular feeding schedule and a safe tank environment – they will venture towards the top half of the tank for long durations, especially if they are a part of a mating pair.

These five species of fish are active swimmers with a predisposition to be inquisitive and explorative in the tank. With good tank buddies, you will see their activity in the top half of the saltwater aquarium, which is usually lacking in some pop and color.