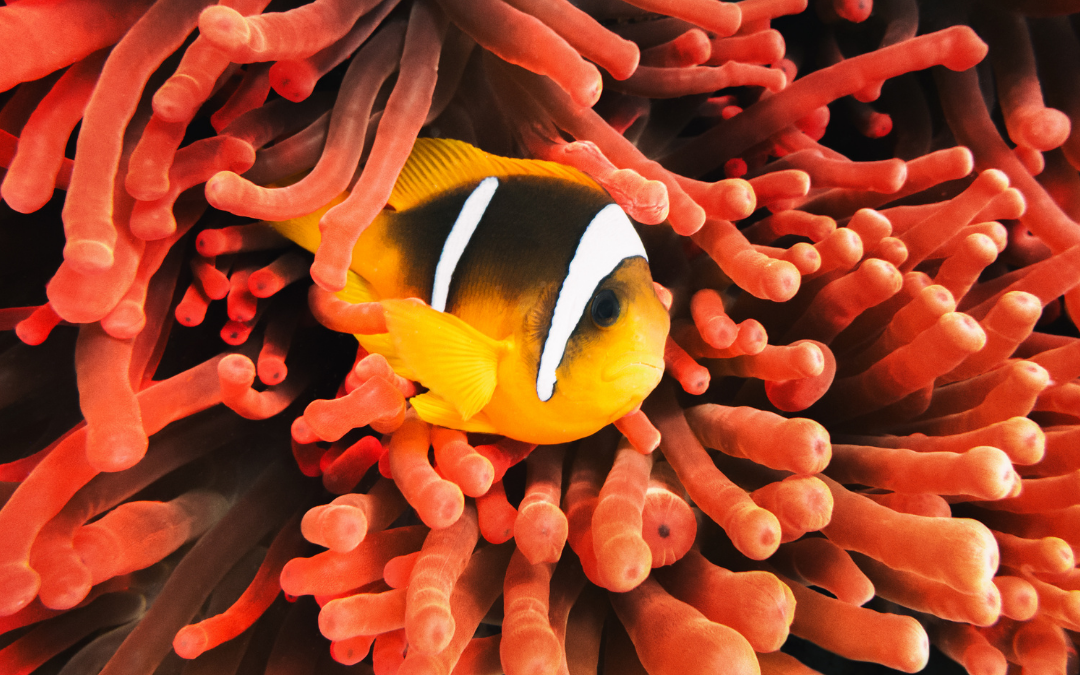 In the case of the clownfish and their host anemone, in return for protection and food scraps the clownfish will fiercely protect the anemone from intruders and preen it’s host, removing parasites. To avoid being fatally injured by the stinging cells on the anemone’s tentacles, when a clownfish first finds an anemone it does a special dance to cover itself in the anemone’s own mucus. In this way, the clownfish actually becomes part of the anemone!

If you want to introduce this amazing friendship into your own aquarium, here is all the information you will need to give your clownfish and anemone the best possible chance at a bond that will last a lifetime.

Clownfish are extremely hardy and are therefore well suited to life in the average saltwater aquarium. We would also recommend purchasing clownfish in small groups of the same species, as they are social fish, and introducing them into your aquarium simultaneously. While many species of clownfish will remain small, some can grow up to 7 inches. We recommend keeping these fish in a tank no smaller than 20 gallons in capacity. Also bear in mind that clownfish love reef tank environments, so keeping corals in preparation for your clownfish will help your clownfish thrive.

The most common colors are the iconic yellow or orange, although red and peach colors are also common. You can even find species that are almost completely black or white!  Popularised by the film ‘Finding Nemo’, the most recognizable species of clownfish is the Ocellaris Clownfish (Amphiprion ocellaris) which exhibits a bright orange body with vertical white bars and their fins are outlined in black. This peaceful and easy to care species only grows to about 3 inches in length, making it a great choice for novices and seasoned aquarists alike.

Clownfish do not need an anemone to survive when in an aquarium but this pair can be an amazing interaction to witness. If you plan to add an anemone there a few care considerations. Firstly, you need strong lighting and water movement to help the anemone photosynthesise and to keep the tissues oxygenated. Before adding any anemones to your tank, be sure you have the right tank setup in place. Some anemones prefer to attach to hard substrates while others can be kept in sand. You will also need to consider how you are going to feed your anemones in order for them to thrive. The anemone species we recommend is the Bubble Tip Anemone (Entacmaea quadricolor), as many clownfish species are likely to host with this anemone including:

In the wild, clownfish are found living among many other reef fish so in an aquarium environment they are happy as part of large communities as well as in smaller tanks. Clownfish are generally a peaceful fish to keep, although they will be aggressive to other clownfish as they are very territorial. Simply remember to keep only one species of clownfish per tank to avoid territorial behaviour. Also ensure you’re not overcrowding your tank, this is a general rule to prevent undue stress that can make fish more susceptible to aquarium fish diseases. Make sure your clownfish are well settled before adding more fish to prevent this problem.

Great tank mates for clownfish include small fish including damselfish, wrasses, dartfish and butterflyfish. Blennies and gobies which are bottom dwelling fish are also easy to keep alongside clownfish. In terms of invertebrates, Peppermint Shrimps and Harlequin Shrimps are peaceful yet interesting additions, that have the added benefit of keeping your tank clean! Key species to avoid are groupers, lionfish, eels and triggerfish as these will prey on your clownfish.