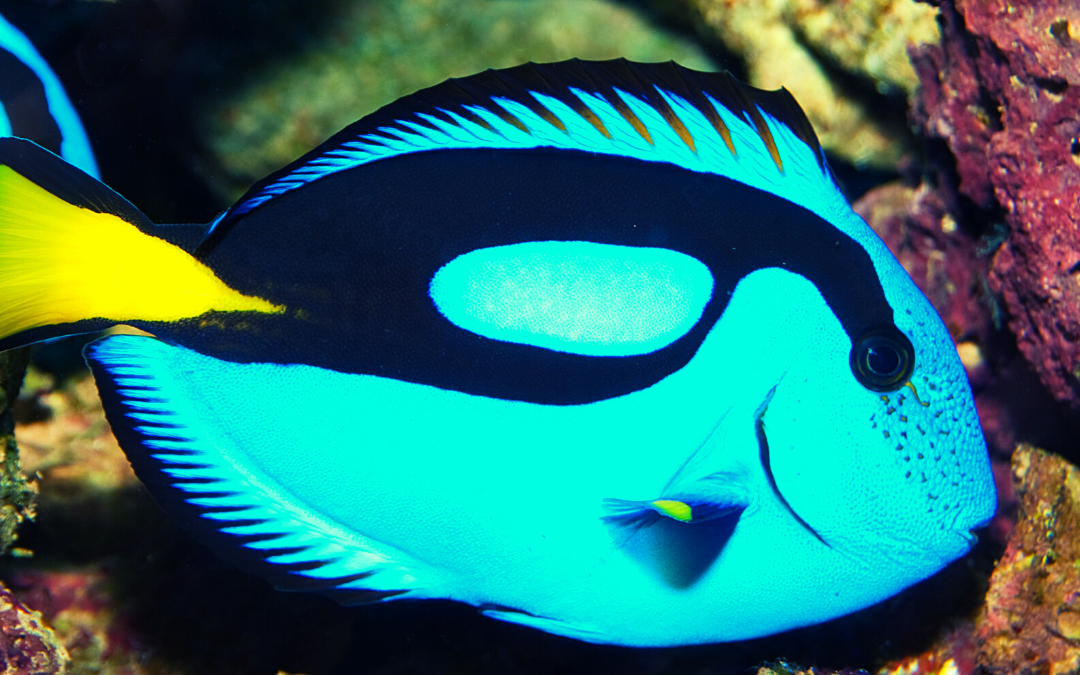 Us aquarium hobbyists are always on the lookout for the next big addition to our saltwater tanks. But we rarely give a chance to the actual ‘big’ additions that will elevate our tank’s beauty and set it apart from the other tank setups we so often browse online.

Medium and large fish are very often overlooked for a variety of reasons that are rather obtuse. First, let us dispel these opinions.

But, most of these reasons are actually completely untrue with regards to the larger saltwater aquarium fish species.

Tank size is a legitimate concern and if you are looking at a nano tank or a tank smaller than 40-50 gallons, larger species is not a good idea. But our experience shows that most beginners go for a 50+ gallon tank and it is widely considered the optimal size for a saltwater aquarium. A couple of medium to large aquarium fish will thrive in tanks of these sizes.

In fact, smaller tanks are tougher to maintain because there are frequent changes in water chemistry and require greater upkeep than larger tanks. They tend to be more expensive too because you have to invest in advanced pump systems and constantly monitor pH and oxygen levels too.

With regards to potential issues with food and aggression, there are several docile and calm species of large saltwater fish that get on well with all tank occupants. Plus, they are much easier to care for than smaller fish as discoloration and malnutrition are easier to notice and they can resist fluctuations in their environment better, making them easier to care for.

Here is a list of some of the best larger species to have in your tank that will be the center of attention, beautiful, and give your tank a more defined and intricate look and balance that is tough to achieve with a bunch of smaller species. We have compiled a list of fish that are atleast 6” when fully grown.

This popular reef fish is one o the most recognized and widely known species of fish in the world. Their distinctive spines running along either dorsal surface, fins and the spine gives this fish an impressive presence.

They are slow and graceful in their movement and rarely aggressive towards other species. Their spines contain venom which gives them immunity from attack, even in the wild. This gives them the freedom to roam currents looking for small invertebrates to eat. They can easily live off the frozen shrimp diet or common fish foods available in the market.

Forgetful, charming, and kind – Dory captured our hearts in the movie Finding Dory. But the real-life counterpart to this animated fish is a regal creature that is an absolutely stunning addition to any tank. Sporting an almost iridescent shade of blue with black markings from the face along the dorsal line, the Blue Tang is one of those species that captures our attention and holds it there.

Their yellowtail and beautiful fin markings make them a striking presence and will serve as the cynosure of the tank. They possess a regal presence, moving slowly through the currents pursuing the tank for bits of algae and seaweed. Their peaceful presence and gorgeous good looks will make you fall in love with them instantly.

Growing anywhere between 6-10 “, this species of Tang does extremely well in 50-90 gallon tanks. They can be found nestling into large crevices but also swimming around the tank at any height. In their natural habitat, they tend to stick close to the reef but in a tank, with the freedom to roam around, they will be an active presence.

They mostly graze on seaweed and algae from the bottom of the tank but also love some frozen shrimp feed. If they are fed regularly with a constant supply of dried seaweed and shrimp feed, they will be happy and healthy and live for 7-10 years in a tank.

This beautiful, unique and widely distributed species of butterflyfish is quickly becoming a popular addition in saltwater aquariums. This popularity is because of their stunning yellow coloring, rectangular body shape, and a long snout that resembles forceps. Because of this remarkable snout, they are also called forcepsfish in common parlance.

Feeding on crustaceans and frozen shrimp, they do extremely well in tanks as a bonded pair (this can be achieved by raising a male and female from a very young age). They are hardy fish that do well in medium to large size tanks. Since they are very active and quick swimmers, a tank that is 90-120 gallons (large tanks) fits them best.

Though territorial sometimes,  they are generally very calm towards other tank dwellers. When fed well and with enough space to swim, they are a timid and non-aggressive species. They add a bright pop of color to the tank. Growing to 8-9 in tanks, they can easily become the preliminary attractions.

This fish found in the waters ranging from the western coast of America to the lively coast of Brazil is a hypnotic beauty. One of the larger members of the angelfish family, this fish grows to be around 9-13” long and can easily be the centerpiece of your tank.

A midnight black body with luminescent gold highlights on the scales makes this fish one of the more stunning and rare beauties of the ocean. A pastel blue face with yellow marking around the eyes sets it apart from its near relative – the gray angelfish.

These fish are omnivorous and feed on plant material like algae and seaweed but also love to munch on tiny marine invertebrates like copepods. They are extremely attractive under aquarium lights and the gold frilled scales shimmer as they swim around the reef in search of a snack. They thrive as a mating pair and tend to live their entire lives paired with a mate. It is advisable to get a male and female as younglings and let them grow up together in the tank.

The last entry on our list is no slouch. Growing up to be around 10 inches in length, this fish displays an incredible change in appearance as it matures. As a juvenile, male princess parrotfish tend to display a plain brown/white color pattern. Upon reaching the terminal of maturity (like puberty) they turn bright blue with brilliant pink highlights and the scales and a pink band running across the face.

Parrotfish are credited with creating coral sand. Their diet of coral polyps and plant matter allows them to excrete out sand that forms a coarse reef bed. In fact, parrotfish sand has aided in the creation of small islands in the Caribbean and its beaches. A parrotfish can produce 90kgs of sand a year.

They exhibit some fascinating mating behavior and females of this species are classified as protogynous, wherein they undergo a change of sex in the absence of a terminal male presence in the reef.

They are great to observe in a tank environment for their unique feeding and mating rituals. Males are also brightly colored making them beautiful additions as well.

These fish species may be overlooked for being too large for many budding aquarists and experienced saltwater aquarium enthusiasts alike. But, there is so much more than just size. When raised in a tank, these fish maintain a desirable size while becoming the center of attraction of your tank. They have long lifespans and are great for jobs around the aquarium too! So, what are you waiting for, give these species a shot and you will not be disappointed.