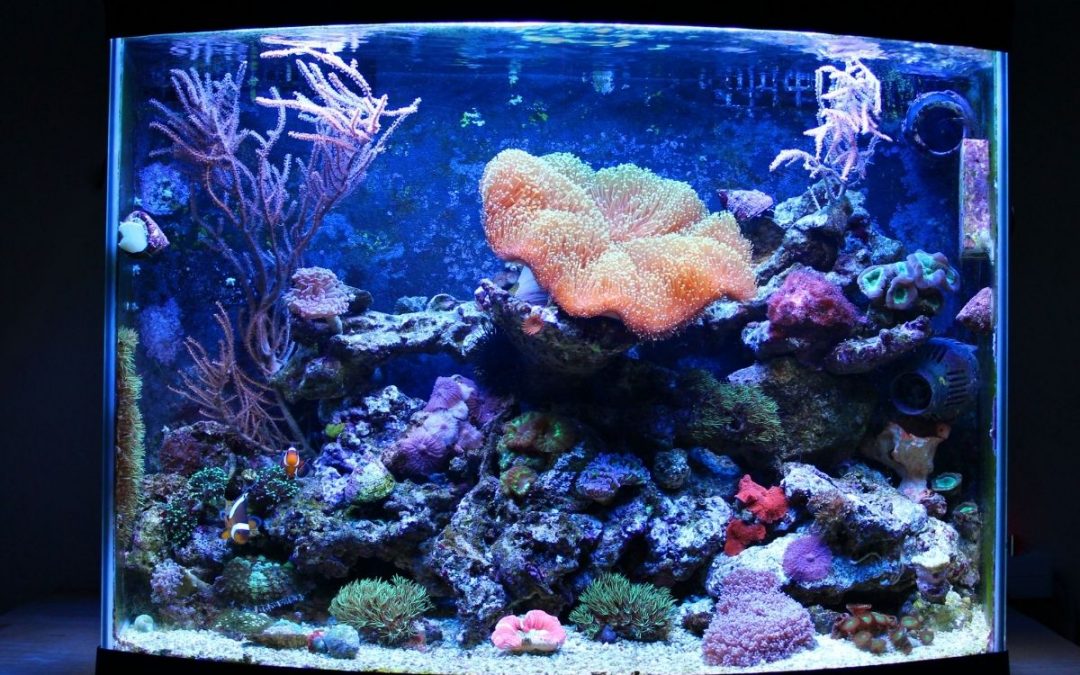 Nano reef aquariums are very common, and it’s easy to see why. Who wouldn’t want a little bit of the ocean on their desk? Particularly when it’s a fraction of the price of larger reef systems. From the saunter of its cautious invertebrates to the sudden retreat of its shy fish, a nano reef provides endless intrigue. Every nook and cranny conceals a secret gem. A nano reef is suitable for experienced hobbyists, providing an exciting and beautiful challenge. Up to the task? Follow our nano reef guide for success.

When opposed to vast natural reefs, all home reef aquariums are miniature reefs in the most literal sense. However, a “nano reef” is a miniature reef system comprising corals, invertebrates, and perhaps a few fish that is usually 30 gallons or less. In such a small space, there’s a lot of complexity.

What Thrives In A Nano Reef?

To avoid overcrowding, nano system specimens must be carefully selected. The best options are small fish with a maximum adult size of just a few inches. They must be introduced gradually, one or two fish at a time, over several weeks. Select species of Soft Corals and Polyp Corals that grow slowly. Fast-growing species can quickly consume your aquarium’s limited space and may even overtake it.

Polyp Corals and Soft Corals such as Cabbage Leather, Thick Finger Leather, and Tree Corals are examples of nano reef specimens. Green-striped, lavender, and bull’s-eye mushroom corals are also suitable. Likewise, small fish species such as gobies, firefish, and blennies are suitable in a nano reef aquariums if you want to keep fish.

Is Keeping A Nano Reef As Easy As It Looks?

A nano reef aquarium’s small size gives the impression of low maintenance. In reality, the difficulties of setting up a marine reef in such a small space make a nano reef a delicate task best left to an experienced or devoted hobbyist. The rationale is straightforward. Because they contain a smaller volume of water, these small aquariums are more vulnerable to changes in water quality and temperature. If there are fluctuations in water quality or temperature, these issues can quickly spiral and put your system under a lot of stress, which can ultimately result in it failing.

Everything is amplified in a closed ecosystem like the nano reef, including the awe, wonder, and management. Observe every day, test often, and fix any problems you find the same day.

The Order of Your Additions

In a coral tank, invertebrates take precedence. Other animals that are compatible with your inverts and will not eat, kill, or otherwise bother them should be chosen. Of course, you should wait until the tank has completely cycled and your water conditions have stabilized before doing so. Before I added any volatile organisms, I did two massive water changes. If you notice algae blooms forming, enlist the help of a cleaning crew to check things out and tidy things up.

Depending on the size of the tank, it may be safer to remove all fish, but you’ll notice that more invert doors have opened. If any of the inverts you want will sting other inverts, put them in first, so they can settle in and stay put. Some inverts are more delicate than others, making them more likely to perish if the tank becomes unstable. Wait until you have a firm grasp on your water parameters if you prefer such species. Think to yourself, “How easy is that to kill?”

In terms of the variety of species you can house only in bigger capacities, full-size mini reefs certainly have nanos beat. While some of us lust after the exotic specimens, the majority of them are clearly marked for bigger configurations. Even the smallest juveniles, who grow quickly, will struggle in such cramped quarters. Unfortunately, fish such as anthias, butterflyfish, and surgeonfish grow too large, and others such as lionfishes, angelfishes, and eels are not reef safe.

Many invertebrates aren’t reef safe, and they won’t be able to survive in a nano as well. This includes some shrimps and crabs, as well as lobsters, which require a lot of food and can kill a small system. Anemones aren’t a good choice for nanos, and most LPS corals are more difficult to place and maintain than their SPS counterparts. Despite the fact that small tridacnid clams can be preserved in nanos with pristine water conditions, they grow far too large to be kept for long periods of time.

Compatible Fish Species for Your Nano

While many creatures are strongly advised against, certain ones can thrive. We recommend the following species:

Pygmy angels are a possibility, but their reef-safe status and maximum size should be investigated first. Please don’t keep mandarinfishes like Synchiropus picturatus unless you have a well-established refugium where you can provide them with a steady supply of small invertebrates to eat.

Compatible Invertebrate Species for Your Nano

Zoanthids are highly regarded because they are among the hardier soft corals and come in a wide range of colors. Nepthea, Xenia, and Cladiella may also thrive, but they should only be used in stable, well-established nanos. Rather than spending more money on fully grown colonies, you can get small frags from fellow hobbyists or groups like the Geothermal Aquaculture Research Foundation for a lot less money.

Peppermints are among the shrimps that have remained at a manageable size and are unlikely to cause havoc. Small hermits and a snail are also required, but not in such large numbers that there isn’t enough algae for them all to eat.

Certain things must be done on a regular basis, just like any other reef configuration. Spend time every day making sure all of the residents are alive and well, and feed them sparingly. Remember that some invertebrates should be fed less regularly than most fish to keep dissolved nutrient levels low and microalgae and cyanobacteria at bay.

Invest in a good test kit to keep an eye on ammonia, nitrates, nitrites, and pH levels. Tests for calcium and phosphate are also recommended, as is checking your specific gravity/salinity and temperature on a regular basis. The majority of tests can be performed once a week, but salinity and temperature should be checked daily, particularly because specific gravity fluctuations caused by salt creep and water evaporation can have a rapid impact on your nano. This is where a more expensive but more precise refractometer comes in handy.

There are new nano supplement formulations on the market; the one I used had instructions for daily drop-wise additions. This is the most effective way to avoid overdosing the system. You can also calculate how much water evaporates from your system on a daily basis and use that information to determine how many supplements you can dose through your top-up water, which can be added manually or automatically.

In general, make sure your components are working properly, clean your skimmer cup and aquarium glass, and perform water changes on a weekly or biweekly basis. If you prefer to do them every two weeks, increase the volume percentage. It’s usually easiest to do smaller ones once a week.