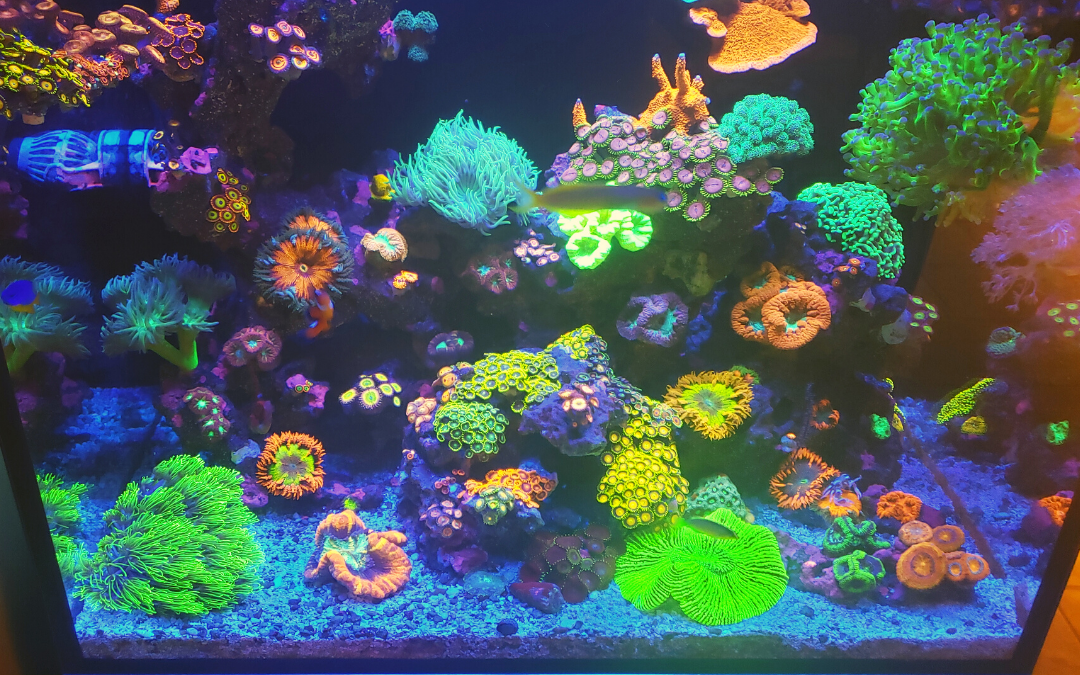 Nano tanks are becoming more and more popular. They allow so many marine life lovers to have a bit of nature in their home, no matter how stretched for space they are! Just like bigger saltwater aquariums, it is great to have inverts in the tank to keep it clean. They also add intrigue and sometimes come in bright colors and cool patterns.

The bumblebee snail is a wonderful invert for a nano aquarium as they are super small, only growing to about half an inch. However, their beautiful stripes that mimic their namesake, and their healthy appetite for uneaten food and debris, make up for their small stature!

This small snail will clean away debris and meaty foods from every crevice of your tank, keeping the nitrates levels healthy. They also are known to bury in the sand bed, eating worms, and aerating the substrate. You must have ample live rock in your nano aquarium for these snails.

Bumblebee snails are carnivores, so are known to attack and eat other smaller snails. This may be a good thing if you have unwanted pests in your tank, however, be careful about keeping them with other small snails. If there is not enough meaty food in your nano aquarium for these snails, be sure to add mysis or brine shrimp to keep them happy.

They are pretty easy to look after once settled into the tank if the water conditions are right. They are pretty peaceful with other inverts and fish, so can be housed with a range of marine life.

The emerald crab is a scavenger and loves nothing less than munching down on algae. They will spend their days on the reef bed picking off bubble algae. As a lot of other cleaning crabs will ignore this type of algae, the emerald crab is a must for those tanks which suffer from this dreaded green slime!

Originating from the Caribbean, the emerald crab can grow to about two inches and will need a tank of 25 gallons per crab. This means that you can only house one emerald crab in a nano tank, however, this crustacean does seem to be content in being the only one of their species in a tank.

These crabs are scavengers so will not just eat bubble algae, but will also clean your nano tank of food debris and other microalgae. When these crabs are well fed, they are peaceful inhabitants and will not bother the other inverts or fish. If there is not enough algae in your tank, simply add some dried seaweed or frozen shrimp to the tank. They are nocturnal and will often hide out during the day. Because of this, make sure your tank has enough crevices and rockwork for them to feel safe and secure.

A lot of dwarf hermit crabs are great for nano aquarium setups. They are small, easy to look after, and will keep your tank clean. The scarlet hermit crab, however, is a reef-friendly, peaceful addition to a saltwater aquarium. Growing to around one and a half inch, their exoskeleton is bright red which really stands out in a nano tank. Furthermore, they do not demand much as long as they have enough food and shells in the tank.

Found in the Caribbean and the Indonesian waters, these hermit crabs feed off a whole range of nuisance algae, including hair algae. They also consume animal and food waste that might be floating around in the tank.

This sea slug is not actually a nudibranch, or lettuce for that matter. They are sarcoglassans and they get their nutrients and color from sucking the chlorophyll out of algae. However, some of the algae is not digested. The slug will maintain half of the chloroplasts that the algae gives it in its own tissue to continue photosynthesis. This gives the slugs more energy. Because of this, they are also known as solar slugs.

They need a tank of at least 20 gallons and are a favorite of many enthusiasts because of their intriguing appearance. They come in shades of yellows, greens, and browns, and have wonderful ruffles that look like fresh lettuce! They also are interesting to watch as they move around the tank.

The lettuce nudibranch will eat hair algae, and this algae can be annoying in aquariums, especially smaller ones. It can quickly overrun the tank, not giving any coral or anemones space to thrive. These sea slugs are happy enough when they get settled into a tank, as long as they have live rock to feed off. They are not aggressive, but be careful when housing them with predatory fish.

These are really cool creatures, however, they are not suitable for beginners. They can be quite sensitive to nitrate levels and are also known to get trapped in pumps and drains. If you are bringing these creatures into your tank, take time to screening pumps and drains off to keep them safe.

The turbo snail is a staple in many hobbyist’s clean-up crews, spending most of their time grazing on algae. Growing up to two inches, with a large, swirly shell, they are a standout invert when put in a nano tank.

These snails are native to the Caribbean and the Gulf of Mexico and are reef-safe and peaceful. Because of the amount of algae that they get through, it is advised to only put one of these snails in your nano tank. If there is more than one turbo snail in the tank, they might starve.

They can be pretty sensitive to quick changes, so make sure you acclimatize them slowly before you put them in your tank. We recommend acclimatizing them with the drip method. They need calcium for their shell, so make sure there is enough in the tank. One thing to look out for with these snails is that they sometimes will fall onto their sides and get stuck. They cannot right themselves properly, so if you see your turbo snail on its side, make sure you give it a helping hand and put it right!

Which Invert Will You Add to Your Nano Tank?

These five inverts are all amazing creatures and are super helpful in keeping your tank clean. A nano tank is really fun, and with these animals, you will be able to keep it looking its best! Which invert will you add to your nano tank?