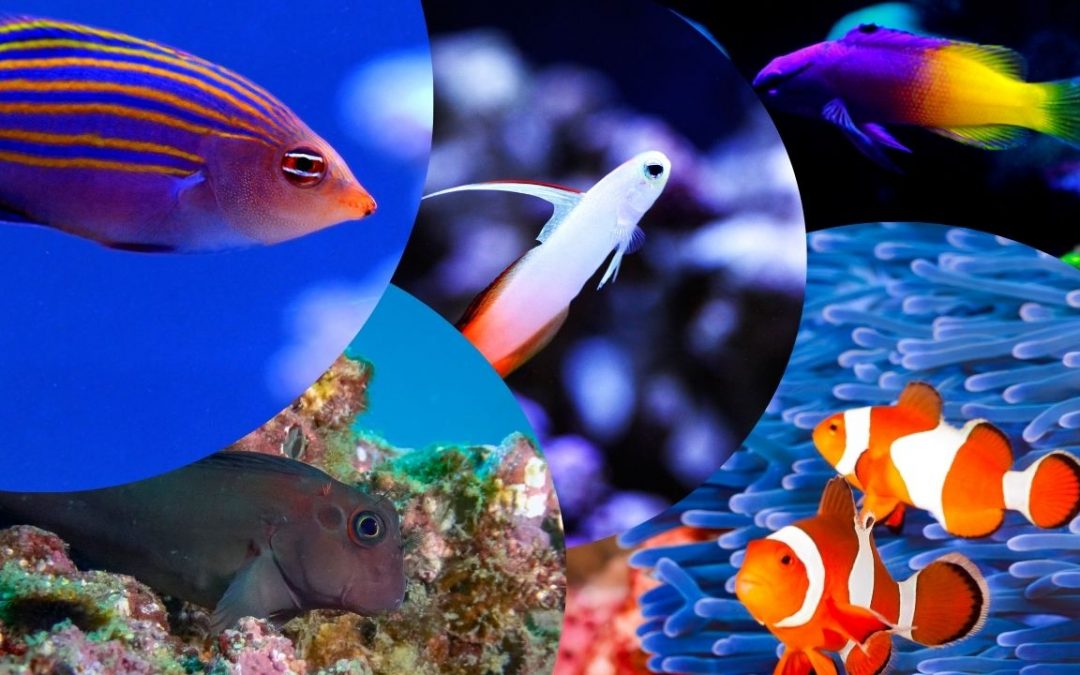 There are so many reasons why saltwater aquariums are great. They let you bring an awesome ecosystem into your home and allow you to witness the wonders of nature that you may not have the chance to see otherwise. However, saltwater aquariums can take up a lot of space, and this might be putting you off starting out with this hobby. Thankfully, nano tanks are becoming more and more popular, allowing enthusiasts who struggle for space to still be able to enjoy saltwater marine life in their own homes! Nano tanks usually refer to aquariums of 30 gallons or less. You can normally buy a nano tank with a kit that includes lighting and filtration.

If you are new to saltwater aquariums and wish to set up a nano tank, read on to learn the best fish for you! These fish are great for smaller tanks and suitable for beginners.

The beloved clownfish is a great addition to a nano tank, growing to around three inches. These brightly colored fish live in coral reefs off the coasts of Australia and Southeast Asia and have a symbiotic relationship with anemones.

Clownfish are hardy and need a tank of at least 20 gallons. We advise you to have more than one clownfish in your nano tank as they as sociable creatures and enjoy the company of others. They do not need an anemone to survive, but they do prefer to have one in their tank. Plus, seeing the clownfish and the anemone interact can be really interesting got witness!

They are peaceful fish so can be housed with other smaller species. Being omnivores, clownfish eat small crustaceans, algae, and zooplankton. They do well in reef tanks and prefer a deep sand substrate. This mimics their natural habitat, allowing the fish to thrive.

A lot of species of goby can flourish in a nano tank, however, the firefish goby is a great fish for beginners. It will brighten up any tank, with a striking red, orange, yellow, and white coloration. It is also a wonderful fish to watch, darting in and amongst rockwork.

Not only does this goby look amazing, but it is also really easy to look after and suitable for nano tanks. It needs a tank of a minimum of 20 gallons and will grow about two or three inches. It is a peaceful fish and will not bother its tankmates, meaning that you can place them in a nano tank with other peaceful species.

Firefish can be timid and therefore need a decent amount of rockwork and crevices where they can hide. They are also known to jump out of aquariums, so make sure your tank has a lid!

They eat algae and zooplankton but be sure to feed them some brine or mysis shrimp to give them all the nutrients that they need.

These blennies are super small fish, growing to around two inches. Panamic Barnacle Blennies are from Panama and are active fish. They only need a tank of 10 gallons in order to thrive. They have yellow-white bodies with darker spots and markings. Because of their markings and colors, they can sometimes be hard to spot in an aquarium!

However, the speed and agility of these fish make them a wonderful addition to a nano tank. They are often racing up and down the tank, watching out for any food that might be going spare! They love to eat meaty treats such as brine and mysis shrimp or small crustaceans. They also feed on zooplankton. They are not very picky when it comes to food, making them great for beginners.

Panamic Barnacle Blennies do need a lot of good rockwork and crevices in order to be relaxed and happy in their environment. They will often hide out in and amongst coral, shells, and rocks.

This beautiful species adds color to a nano tank, with its stripes of blue and orange. Growing to around three inches, they need a tank of at least 30 gallons. If you are housing them in a nano tank, only add one as they can become territorial and aggressive to other six line wrasses.

Another active species, the six line wrasse will often dart around the tank looking for food. They need rockwork to hide out in and are sometimes seen guarding a hiding spot that they like! They are hardy fish and not picky when it comes to food, feeding mainly off crustaceans and other meaty foods. A great thing about this fish is that it will also eat aquarium parasites such as bristle worms and certain flatworms, keeping your tank healthy and happy! They spend a lot of their time picking at live rock and foraging for food.

They are suitable for beginners and tend to be pretty relaxed, however, they are known to be aggressive to their tankmates. This will happen if there is insufficient food or hiding spots for the fish. Certain fish that are not that competitive when it comes to food might starve when sharing a tank with the six line wrasse.

This is a super popular fish for saltwater aquarium enthusiasts and you only have to look at it to know why! Originating from the Caribbean coral reefs, its body is purple and yellow, with unique spots and shades. They grow to around 3 inches and can thrive in a nano tank of around 30 gallons.

Royal Grammas are pretty resilient fish and therefore suitable for beginners. They are resistant to a lot of common illnesses and are not too sensitive when it comes to water changes in the tank. They are reef safe and peaceful with their tankmates. If you are wanting to add one of these fish into your nano tank, be sure to have a good range of rockwork and hiding places for them. They can be quite shy, and if there are not enough hiding places for them they will get stressed. This can impact their health. When they become confident in the tank, you will often see them suspended in the water, floating. They are also known to be jumpers, so make sure your nano tank has a secure lid.

This species mostly feeds on zooplankton and phytoplankton, but will also enjoy meatier foods such as brine and mysis shrimp. They are not fussy when it comes to food, but make sure they have a variety of options!

Which Fish Will You Add To Your Nano Tank?

These five fish are all hardy species suitable for beginners. They are peaceful fish that can flourish in a nano tank as long as their needs are met. We love these species, and love how unique they are! Each one has its own personality and striking looks. Which fish are you going to add to your nano tank?